The mood of America's youth 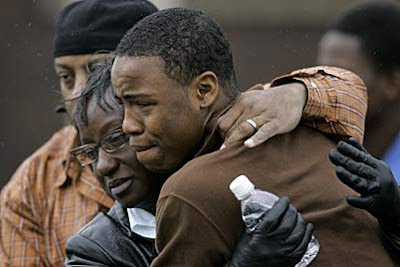 What has happened to America’s youth? The recent shooting at a Cleveland High School raises questions related to the state of mind of young people in this country. A 14-year old suspended student opened fire in his downtown Cleveland High School, injuring four people before killing himself.

One has to be careful not to over generalize when it comes to an event like this. It’s safe to say that what happened in Cleveland is not indicative of the mindset of all youth. With that being said, there seems to be a shifting of the mood among youth in America. There is sadness in our nation that has impacted the psychological well-being of this generation.

For every time a student takes his or her hostility out on their peers, one stops to reflect on if the same could happen in their backyard. Could Durham, North Carolina be the next Columbine? That’s a tricky question due to the way these incidents happen. One never knows who among them is close to going over the edge.

These horrific acts force us to contend with a number of assumptions we make. Parents rest in the confidence that their children are safe and will be provided a quality education due to where they are enrolled. The “good schools” become no more than figments of a parents imagination when placed within the context of one child going wild. It can happen anywhere at anytime. It’s humbling to think that resources aren’t enough to secure the safety of a child.

What is that breaking point? There must be some deep-rooted angst eating at the soul of America’s youth. What change within our society has fostered an environment that creates space for young people to contend that violence within the school is an option for resolving pain?

I’m not one to glamorize the good ole days. People are often too quick in pointing back to days gone by as a reminder of what should be done. I’m not convinced that yesteryear was much better, but one thing is certain-youth didn’t shoot people in their schools. There were other issues that consumed society. Problems like black people hanging from trees and the objectification of women for the purposes of a males self gratification and leaders being killed for standing for a cause, but, again, kids didn’t shoot their peers at school.

I’m not going to blame all of this on the removal of prayer in the schools, the end of corporate punishment in the school or the demise of neighborhood schools. I won’t point a finger at the withering family unit and impugn single parents for the decline of civility in America. I won’t even point that nasty finger at Hip-Hop culture, violence on television or the emergence of video games and the internet.

We are quick to find easy answers to complex problems. Beneath all of the brokenness there is a more pressing subject to be raised. What is the mood of the country? Have we been seduced into a state of depression? Is the country suffering from corporate low self-esteem? If so, what is it that has robbed us of the confidence we need to overcome the brokenness we feel?

To their credit, my parents have instilled in me an amazing confidence. They have poured into me a faith in me that will never be hindered by any obstacle that comes my way. My mother has imparted to me a commitment to social action. While in High School, she took a trip to Haiti after learning of their pain. She wanted to make a difference. When she confronted the load of homelessness in Columbia, Missouri, she took up the cause of opening a homeless shelter. When inspired to do more with her life, she went back to college late in life to complete a degree in social work.

Then there’s my dad. In his twenties he was out hunting one day. His rifle backfired as you shot at a rabbit leaving him in the woods bleeding to death. They found him drenched in blood. Miraculously he survived. Now, there is the reminder of that day. The fingers on his right hand remain clutched like claws due to the injury. His handicap never stopped him. His passion for life, faith in himself and love for his children were enough to keep him focused on providing the best he could.

Never a complaint parted his lips. Never did he allow his race or handicap mold his perception of himself. He pressed me to do my best, always believing I would go off to college and never forcing me into deciding on a career because of how much it would pay. These virtues helped mold me. My parents battle to achieve and my witnessing their grappling propelled me to dream.

There was no space for competition with my peers. The only thing in my way was me and my inability to see what can be, no matter what, if I keep pressing forward.

Maybe we have lost our confidence in our youth. If so, maybe it’s because, deep down, we have lost faith in what each of us can achieve.

Thanks mom and dad. Pray for my pops. He’s recovering from heart complications. Love you. I am who I am because of you