There are those special people who touch your life so evocatively that things will never be the same again. The sanctified folks call it an anointing. Others refer to it as a unique quality, a special gift that impacts others in a significant way. I’ve learned to not take the role of those people for granted. I have met three of them: Dr. C. Eric Lincoln, Dr. Samuel Procter and Dr. John Hope Franklin.
I met each of these great men through my studies at Duke University. I decided to move from Missouri to Durham, NC to study due to the contributions of C. Eric Lincoln and John Hope Franklin. I was amazed at their ability to press beyond the obvious.
Lincoln’s book The Black Muslims in America introduced to the world the mind of the Nation of Islam. I wanted to sit at his feet. I came to Duke to take classes with Lincoln. All I needed was one. I loved his humor and bent on life. To this day I laugh whenever I think of the time he told us the story of his temptation to become a minister. He talked about how he practiced preaching in front of a mirror and was certain he could fascinate people with his preaching.
Sam Proctor came to Duke as a visiting professor. By the time he arrived I had graduated. This didn’t prevent occasions for us to meet over lunch to discuss faith and life. I’ll never forget the day he called Alvin Bernstein while we were at the Duke Divinity School book store. “You guys need to pick up The History of God by Karen Armstrong,” he said. We both did. “It will open your eyes...” It did.
Arvil Strickland, my African American History professor at the University of Missouri used Franklin’s book like the Bible. From Slavery to Freedom told the story of our past like no other. I came to Duke because I wanted to walk on the ground where he taught. I’ll never forget our first encounter. I was picking up Chinese food when he walked in to get his take out order. He smiled at the cashier-there was something about this man that stood apart from others.
“Dr. Franklin,” I approached him. “I’m Carl Kenney and I love your work.”
“Carl Kenney,” He said. “I love your work.” My heart stopped beating. He knew my work. His words reflected more of a statement about him than about me. He was in touch with the world around him. Despite his work with President Bill Clinton, and his travels around the world, he found time to read the local newspaper. He was a gentle man. The struggles of his past had not hardened his heart, but rather shaped a man full of faith and love.
Franklin died on yesterday. He left behind countless imprints. Many have been moved by his gentle spirit. Yes, many know his scholarship. Others simply knew the man. From Victor and the boys at Imperial Barbershop next to the Hayti Heritage Center to D.J. Kraze and the patrons of the Ideas Coffee House-Franklin has made an impression that we will never forget.
I called my friend Dante James to check on him yesterday. As a documentary film maker, James has garnered inspiration from the sages. He thought of them when he worked on “Eyes on the Prize”. They walked with him as he produced “Slavery and the Making of America.” I felt his pain as we spoke.
“This is hard Carl,” he said. “This is really hard’.
I reflected on the conversation I had with Dante about Gordon Parks. I imagined then how it must have felt to have a conversation with him. I considered how blessed I have been to walk in the steps of greatness-C. Eric Lincoln, Samuel DeWitt Proctor and John Hope Franklin-three men who are no longer with us.
I approached a stop light near the intersection of HWY 54 and HWY 55 in Durham. As the light turned red I said a prayer. “God, remind me, mold me, teach me,” I paused. “To be more like these great men." I stand on the foundation built by their efforts. I pray for this generation. Our leaders are dying. Our inspiration is dying. Our strength is dying away. Grant us the strength we need to be more like them. “
Amen.
Posted by REV-elution at 10:30 AM 1 comment: Links to this post 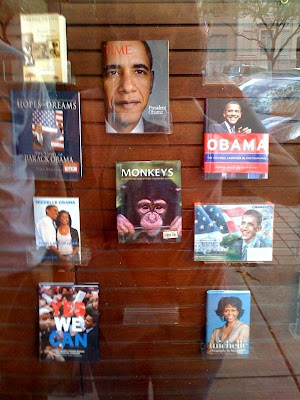 What’s up with all these monkeys? After weeks of getting over the New York Post cartoon depicting a police officer shooting a monkey, we’re now asked to contend with the display of books at the Coral Gables, Florida Barnes & Noble featuring Barack Obama books into which a book named “Monkeys” was inserted. What’s up with this fascination with connecting black people with monkeys?
My reaction to the cartoon in the New York Post reflected my position as a member of the press. It is my contention the freedom’s articulated in our Constitution must be protected at all cost. As much as the cartoon stirred painful emotions, I stand by the papers right to publish it. As much as I desire the head of the cartoonist and editor who allowed it to be printed on a silver platter, I will stand on the paper’s Constitutional right to publish the thoughts and opinions of those who work for the newspaper.
It is my belief that we suffer, as a nation, when we hold as an expectation a brand of news void of true feelings. The protections of freedom of speech and press are held high within our Constitution due to the struggles of those who fought for our nation’s freedom from British rule. The men and women who settled in America represented a variety of perspectives. They came seeking the freedom to worship void of intrusion from the government. They fought for the right to protest when their thoughts differed from those in rule. Maintaining and protecting our freedoms demands sensitivity toward those who hold opinions that differ from our own.
My hope has been that our modern day press would break free from the limits imposed by the demands of the machinery that fuels our economy. I’ve hoped for a press that would stand outside the restrictions caused by the pursuit of advertisers to maintain the business of informing the public. The press protected in our Constitution regarded the press as the watchdog of government. In many ways the press was seen as an arm of this enterprise we call freedom. The role of the press was to evoke a variety of perspectives. Some of them we like. Many we don’t like.
This is what John Stuart Mills advocated in his classic book “On Liberty”. He pressed for a nation where a variety of opinions would be heard in what he termed “the marketplace of ideas.” That cartoon, as offensive as it is, is an idea. I fight for the right for it to be printed. Why? I do so because it is reflective of an emerging “idea” within our American marketplace of ideas.
What is that emerging idea? That Barack Obama, and the countless others who look like him, have more in common with ‘monkeys’ than humans. As painful as that is for me to hear, I’ve been around the block enough to know it is true. I’m not shocked, nor should anyone who is black, that there exists in America a segment of the population angry that a black man has been elected to hold the highest office in our land. We all knew they would be pissed at that.
We shouldn’t be surprised that monkeys keep popping up. At issue is what do we do when a monkey shows up? I have an answer to that question-nothing. Why feed the flame of discontentment. Why march in opposition when a carton appears? Why boycott Barnes & Noble when a book appears in the middle of others that celebrate our first black President? What difference does it make when we draw more attention to the insanity of those who believe black people are monkeys and don’t deserve the power they have been given?
To protest in this season minimizes the victory of this moment. There’s no need to go back to those days of marching and singing freedom songs. Doing so robs us of the victory won on January 19, 2009. There’s no need to protest and march when the battle has been won. There’s no need to fight the people at Barnes & Noble. They contend it was a prank of one of their customers. I have no reason to dispute that claim. More important than all of that is the truth of my own identity.
No, sir. No ma’am. I am not a monkey. I am a man. I am a black man. I’m a proud black man. As much as you would love to reduce me to the image of your own imagination, I have no time to play your game. The class has been dismissed on that old strategy. Play monkey see, monkey do. As for me, I will merely laugh at you and pray.
What will I pray? I pray that you will grow up and see the truth. You can’t change what we have chosen as a nation. Call him a monkey if you want. If that’s your truth I have a suggestion for you. Go rent the movie “Planet of the Apes.” Watch it close, because in that world the monkeys rule the humans. So, bow down to the monkey.
In the meantime, remember one thing.-“Sticks and stones may break my bones but….” You know the rest.
Posted by REV-elution at 12:29 PM 4 comments: Links to this post