Declining admissions at the University of Missouri reflects the state's ongoing struggles with conversations involving race. 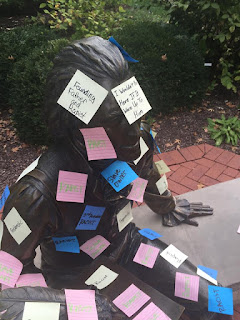 (Photo: Students at the University of Missouri placed post its on a statue of Thomas Jefferson to protest the hypocrisy of his role in establishing the university as the first public institution of higher education west of the Mississippi River in 1839)

There will be a lot of empty seats this fall at the University of Missouri at Columbia. It’s hard to imagine my alma mater returning to what it was before the protest of 2015.

In my mind, that wouldn’t be a good thing.

Officials, at the state’s flagship school, report only 4,009 first-time freshman deposits for the upcoming academic year, a 35 percent decline from the 2015 class of 6,191 students. The student population is shrinking at a rate that has forced the closure of seven resident halls and the elimination of 400 positions.

There’s a lot of blame to go around.  Fewer students are graduating from high schools in Missouri while the University of Illinois aggressively recruits students born in Missouri. Missouri didn’t have a plan. Administrators took growth for granted.

Sure, there are other reasons, but most people blame the reduction in student enrollment on protests led by members of Concerned Student 1950 (a group of black students who called for the ouster of the University of Missouri System President), a hunger strike and a boycott by members of the football team.

If you live in Missouri, and read comments on editorial pages in local newspapers, you will sense the bitterness among residents. As a former columnist for the Columbia Missourian, the daily newspaper run by the school of journalism at the University of Missouri, and adjunct instructor at the school of journalism, I learned to avoid those comments.

They were brutal. Readers blasted me for promoting a racist agenda and participating in the demise of the university. None of that is new. It comes with being a column writer.

What is useful ,related to what is happening at the University of Missouri, is how the politics involving race impacted the ability of those on campus to improve race relations. It was the meddling of members of the Board of Curators, combined with threats from alumni and members of the state General Assembly that complicated efforts to move forward.

Most of it is fueled by perceptions involving race among those who live in Missouri.

In Missouri, the University of Missouri at Columbia is distinguished from other state schools due to its international influence. Its top rated school of journalism draws students from around the world. It’s a research institution that generates interest from students in medicine, the sciences and a bevy of liberal arts programs.

The students who attend the University of Missouri are unlike the people who live in other parts of the state. Missouri is vastly rural with large populations of blacks in St. Louis and Kansas City. Columbia is a city with a small black population suffering from substantial economic disparity.

Black students who attend the University of Missouri come from communities more engaged in addressing implications involving the history of race and racism. Those students are faced with the reality of the university’s inability to confront the lack of diversity, inclusion and equity. Student protest exposed what has always been there.

The response of those outside the university made it difficult to build relationships aimed at repairing division on campus.

Rather than protect academic freedom and celebrate the power of First Amendment rights, critics of student protest concentrated on a false narrative regarding student protesters. Many failed to honor the legitimacy of the demands students made based on their limited perspective..

Why would a parent send their child into a climate that fails to honor their passions? More than the role of student protest in fostering declines in enrollment, it’s the insensitivity of those outside the university that stirs disinterest in attending.

The University of Missouri could have become a model campus regarding how to deal with racial tension. It was the high road that could have led to massive change.

Members of the Board of Curators and the General Assembly took the low road. They blamed black students for compromising the integrity of their happy home.

Why would you want to attend there?
Posted by REV-elution at 1:55 PM No comments: Links to this post