I feel my mama's love when I breathe 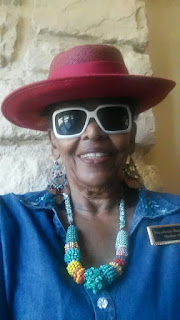 Doris Albertine Warrick Kenney was born on May 30, 1936, in Bunceton, Missouri. She resides in Kansas City, Missouri where she continues to teach lessons about freedom.

Breathing is a reminder that we’re connected by a chord detached shortly after my birth. I was loved in my mama’s belly in ways never forgotten in a world filled with torment. My mama’s love was taught by a spirit more powerful than anything this world tries to take away.

My mama didn’t have good teaching about how to be a parent. Her mama died not long after she was born. The white doctor told her eleven siblings to prepare for the worse because their mama was old and gave birth to too many children. He couldn’t stay long because he had to go deliver a horse.

My granddaddy ditched town and headed to New York city after my mama was born. His exodus out of Bunceton, Missouri was part of a great Black migration. Granddaddy ended up being a loan shark. He spent a good part of his life in prison for murdering two men.

My mama didn’t learn about her mother’s death until one day at church. She was eight or nine and thought Mama Betty was her mama until the preacher’s son whispered in her ear, “Mama Betty ain’t your mama, your mama rotten in the grave.”

My mama told me she slept in the casket with Mama Betty the night before people came to the house to say their last goodbyes. She felt nobody else loved her after her real mama died because she came into this misery filled world. Mama Betty must have told my mama about a love deeper than the connection of an ambilocal chord.

My mama carried the guilt of not having a mama and the dread of having a murdering loan shark as a daddy. My mama’s love for me is about protection. It’s about giving me something she never received. A real mama loving her babies by protecting them from the pain of abandonment.

My mama teaches me lessons about freedom. Freedom isn’t always about the things out there. The most difficult things to overcome are within. My mama had to break free from all those inside demons. They bruised her soul like traps unwilling to let my mama explore her dreams. My mama battled the demons of racism and gender inequity. Mama went to battle to overcome those traps created by what people thought she’s supposed to be.

Mama trailblazed her way through the weeds of limited imaginations. Too many people told my mama what she couldn’t be. No mama to comfort her. No daddy to support her. Mama Betty went to rest among the ancestors leaving my mama alone to find her way.

My mama teaches me lessons about freedom. It takes courage to break free from being conditioned to a life of inferiority.  It takes determination to keep pressing when the thoughts in your head keep talking. They talk about the place of a Black woman in world dominated by white people. They talk about a woman’s place as the tool of Black men.

My mama’s freedom from those inside demons taught me lessons a son needs to defeat his own demons. Fighting the inside stuff gives the strength to attack what’s on the outside. My mama fought the inside stuff to obtain her college degree. My mama used her degree in social work to work to overcome homelessness. My mama addressed economic disparity by establishing a collaboration between Black business owners in Columbia, MO. My mama created businesses and worked in her local church as an advocate for social justice. My mama travelled to Haiti to learn more and give more.

My mama’s freedom is a lifelong journey. Now in her mid-eighties, she’s defying the demons of ageism. Her freedom won’t let her stop finding ways to love and give. There’s too much pain out there. There are too many hurting people in search of the roadmap to freedom.

I have the freedom to inhale and exhale unlimited possibilities.

You can support the Rev-elution in providing local, Black, journalism by contributing at: Cash App, $CMizzou, or Venmo, @Carl-Kenney-1

Durham County Commissioner Nimasheena Burns tells members of the Durham Public School Board they have a problem with underspending, not underfunding

Durham County Commissioner Nimasheena Burns is challenging members of the Durham Board of Public Schools to spend the money allocated from the county.

In an open letter titled The Billion Dollar Question, Burns says funding shortages in education are a result of problems with underspending as opposed to underfunding. She contends the narrative of underfunding is falsely perpetuated by members of the school board when the facts clearly showcase the opposite.

Burns comments are based on a detailed report of county funding for schools discussed during the May 3, 2020, commissioners meeting.

“The public messaging has made it appear the County has done nothing. Yet, based on page 3 (of county report), of the $10 million allocated in 2019, only $1.46 million has been spent, which is about 15%.,” Burns’ states in the letter. “How can DPS facilitate faster spending rates on critical projects, especially given the significant increase in funding for DPS was allocated earlier this month for additional spending capacity?”

Burns’ questions why school board members blame the county for limited funding when the data shows funding from multiple sources.

“What I don’t understand is how the County can be blamed when dollars were made available for these projects and $3.5 million remains unallocated to any project,” said Burns. “I have looked at those past meetings and invite the public to do the same to see what the past board did in the way of funding. Further $4.2 million in lottery funds have not been appropriated.”

Burns questioned reports in local newspapers involving a lack of county funding for an HVAC project at the Durham School of the Arts. She says funding for the project was approved on November 25, 2019. She cites a state report showing an accumulated balance of close to $4.3 million in lottery funds that could be used for the project.

“When some people on the school board have been asked about this Capital Improvement spending, I have seen members of this board act is if my fellow board members took no action. That is not true. When statements are made in the public by citizens who do not have the privilege or opportunity to know the ins and outs of our work, we should give them the correct information,” said Burns. “Telling the TRUTH should not be hard. Asking questions should not be seen as acts of defiance.”

Burns says after discussing the details of the county report on school spending with school board members, many informed her they were unaware of the available funding for school needs.

“Our students and teachers deserve to have those dollars spent. Based on a Budget Meeting on yesterday (August 3), there is still $49 million dollars left in past bond that has not been spent. That is not an accusation, it is an observation,” said Burns. “I am hopeful that you can receive it as just that, a very real observation. While I will not go so far as to falsely criticize your board or staff as many of your members have done my board and my staff, I will state that I have concerns about future planning based on some of the inquires I provided above.”

“This is not the time to be defensive, but a time to be decisive. I look forward to your thoughts on these issues,” said Burns. “Actual answers, not more accusations. If the answers, don’t exist for you, I would hope that we could move forward with spending the above-mentioned funds on things that will help our parents, teachers and students, all learn, eat, work, play and innovate in a safe and supportive learning environment.”

You can support the Rev-elution in providing local, Black, journalism by contributing at: Cash App, $CMizzou, or Venmo, @Carl-Kenney-1