The Soldiers Reunion in Newton, NC is a celebration of the confederacy 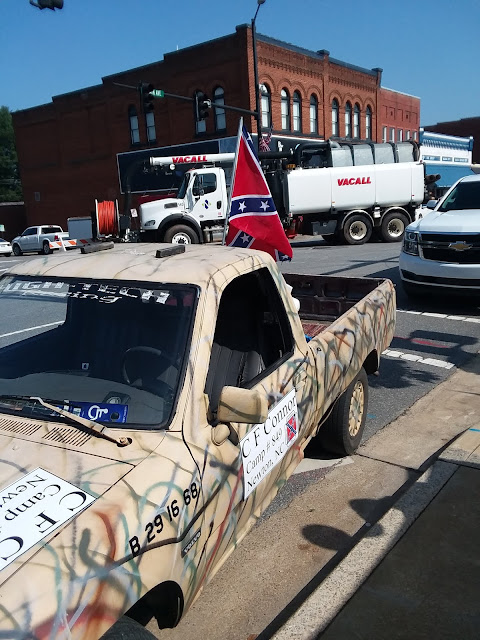 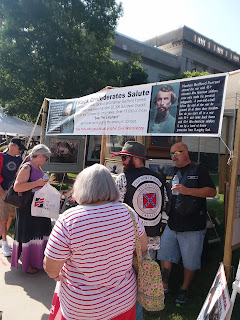 Some call it Southern pride. Others call it racism. Maybe the truth is somewhere in the middle, making it difficult to understand the difference.


I began my day in search of the truth. I should have known it would be a bad day.


It started with a cup of coffee at H&W Drug Company, a locally owned business with an old school lunch counter. I paid one dollar for the cup and left the same for the tip. The people lined up next to me updated each other on life in Newton, NC. It was part yes ma’am and a bunch of Southern hospitality that made Newton the perfect place for the people at the counter to live.


My cell phone buzzed, alerting me of a text message.


We knew it was coming, but it still hurt. I looked at the people at the counter to share the news.


“Aretha just died,” they looked at me in dismay. I repeated. No change.


Maybe they don’t listen to black music, I thought as I prepared to leave. I was reminded of my first day in Newton. I ordered breakfast at Callahan’s, a diner on the other side of the town square. I was surrounded by pictures of John Wayne, the godfather of American Western movies.


Wayne’s quote, in the May 1971 issue of Playboy, was stuck in my head in a way that felt like a scene from the movie “Get Out”.


“With a lot of blacks, there’s quite a bit of resentment along with their dissent, and possibly rightfully so. But we can’t all of a sudden get down on our knees and turn everything over to the leadership of the blacks,” Wayne said. “I believe in white supremacy until the blacks are educated to a point of responsibility. I don’t believe in giving authority and positions of leadership and judgment to irresponsible people.”


The pictures felt like a public service announcement - black folks, stay in your proper place, or we’ll meet you on the other side of the O.K Corral when the sun goes down.


It was shortly before 11:00 a.m., and the crowd was gathering for the Solider Reunion parade. That’s what the people in Catawba County, NC call this brand of intimidation. The book “Looking Back, Marching Forward: One Hundred Years of Solider Reunion, published by the Catawba County Historical Association, dates the event to 1889. That’s when Julian S Carr published a resolution in the News and Observer to form the Confederate Veterans’ Association of North Carolina.


In addition to forming the state organization, groups were asked to send delegates to the National United Confederate Veterans convention to be held in 1890. By 1903, the planning of reunions came under the auspices of the United Daughters of the Confederacy.


The time before the parade evoked the type of symbols that bruise the souls of black people. I walked through the crowd suspicious that two men wanted to have a conversation regarding why I was there, and it being better for me to go back to where I came from.


The tension was deeper than the pretension that normalized the moment.


“Black Confederate Soliders Salute Thomas Stonewall Jackson and Nathan Bedford Forrest,” are the words on a banner at a booth promoting black love for the Confederacy. “It has been estimated that over 65,000 Southern blacks were in the Confederate army ranks. Over 13,000 of these ‘saw the elephant’ also known as engaging the enemy in combat.”


I couldn’t help but think “did slaves have a choice?” I few men, wearing leather jackets with Confederate flags emblems on the back, seemed to dare me to refute the message on the banner. I kept walking knowing the fake news wins, and black lives don’t matter when the crowd is swayed in support of this version of Southern pride.


I stood in the shadow of the 26-foot Confederate monument erected to remind people the war continues.  Everything about the statue felt like a middle finger to the demands of the Union army. In the South, the Confederacy didn’t end with the Civil War. Statues were dedicated commemorating the ongoing quest for white supremacy.


The statute in Newton, NC was dedicated during the 1907 Solider Reunion festivities. The widow of Stonewall Jackson declined an invitation to attend the event, citing poor health. Jack and Warren Christian, the great-great grandsons of Stonewall Jackson, wrote a letter, published in Slate Magazine on August 17, 2017, requesting the removal of Confederate monuments because they consider them racist.


“We have learned about his (Stonewall Jackson) reluctance to fight and his teaching of Sunday School to enslaved peoples in Lexington, Virginia, a potentially criminal activity at the time,” the great-great grandsons wrote. “But we cannot ignore his decision to own slaves, his decision to go to war for the Confederacy, and, ultimately, the fact that he was a white man fighting on the side of white supremacy.”


That’s not how Southerners felt when they dedicated the monument in Newton. Between 15,000 to 20,000 people attended the unveiling of the monument. No one showed up to protest the monument based on how it made black citizens feel. There was a group who protested due to the removal of a tree. The tree mattered more than how black people felt.


Julian S. Carr played an instrumental role in bestowing white supremacy and the rise of the Klu Klux Klan, in North Carolina. He called the murder of 60 blacks during the Wilmington Massacre of 1898 a “grand and glorious event.” Carr celebrated violence and the lynchings of blacks. His popularity in North Carolina was enough to land him a nomination to become vice President of the United States at the 1900 Democratic National Convention.


The Confederate soldiers “saved the very life of the Anglo Saxon race in the South,” Carr said during the dedication of Silent Sam, the Civil War Monument on the campus of the University of North Carolina – Chapel Hill, in 1913. “The purest strain of the Anglo Saxon is to be found in the 13 Southern States.”


When protestors toppled Silent Sam on August 20, it was perceived, by some, as an attack on Southern pride and heritage. Like the 26-foot high monument in Newton, NC, Silent Sam is a symbol of intimidation. It is a reminder that the attack on black people didn’t end with the Civil War. The Confederacy never died. The Soldiers Reunion reclaims the goals of the men and women who fought to assert the claims of white supremacy.


The signs of Southern heritage and white supremacy merged to form a new collective identity. Absent was the suppression of images that are often assumed to promote racism. They were in full display. It felt like racism has come out from hiding. It felt like hate unencumbered by how it makes black people feel. They didn’t care that I was watching. They seemed to gloat in their ability to wave Confederate flags. It felt like an entire community was spitting in my face.


Confederate soldiers packed the streets. Six men pointed their rifles upward and fired shots in the air. Women dressed like Southern Bells walk ahead of a truck loaded with Confederate flags. The long line of jeeps, trucks and cars hoisting the “Blood Stained Banner”, the national flag of the Confederacy, was more than any black person can take.


The last of the cluster of flags passed where I was standing. I took note of the line of people on both sides of the street. Men, women and children flapped Confederate flags to conjure the spirit of the moment – white power, white supremacy and white solidarity. My disappointment in the celebration paled in comparison in what was missing.


Where is Black Lives Matter? Where are the chants of “no justice, no peace?” Where is the crowd of progressive white people to fight the assumption of hate? Where are local black citizens to protest the mob displaying the symbol of white rage?


“Excuse me sir,” I middle-aged white woman said as she approached. “May I ask you a question. How did that make you feel?”


“I’m from Newton. I’ve been coming to this event since I was a kid. It has never been this bad. It was too much. It’s too much for me. I just wonder how it made you feel.”


I paused to acknowledge the brewing of tears.


There was something about the look on her face. It was too much for her to take. We both fought back the tears. My attempt didn’t last long. It was the thoughts about my ancestors. A part of their fear was captured in that moment. The flags. The cheering crowd and 26-foot statute to celebrate the Confederacy – it was too much to hold without the flooding of tears.


I nodded my head to denote my appreciation. She did the same.


I watched as the parade continued. One by one, face by face, thought by thought, it was too much to limit to a few words. The history was not enough to explain that moment. The pictures of John Wayne on the wall at Callahan’s told part of the story. None of it is enough to explain the rest.


They didn’t know Aretha Franklin. I took a few deep breaths before leaving.


James Baldwin said it long ago. “Nobody knows my name.”