You say you want a revolution... 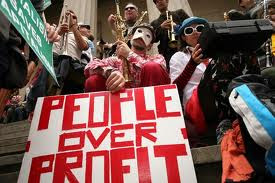 I just got word that Steve Jobs is dead. Jobs is best known for teaming up Steve Wokniak and Mark Markkula to design, develop and market Apple computer. The team was among the first to recognize the potential of Xerox PARCs mouse-driven graphical user interface and used that technology to create the Macintosh. Jobs played a major role in the Walt Disney Company, but the thing that stands out for me is his academic credentials. He enrolled at Reeds College in Portland, Oregon and dropped out after one semester.

As CEO of Apple, Jobs earned a salary of $1 a year. He made up for his low pay by holding 5.426 million Apple shares and 138 million shares in Disney. Forbes estimated his net worth at 8.3 billion in 2010, making him the 42nd wealthiest American. Not bad for a college drop out.

It’s people like Jobs that caused Occupy Wall Street. Since Sept. 17 protesters have been camping out to make a statement about America’s economic system. Low and middle class Americans are angry. They are angry because they have been fed a bag of lies. They were told that a good education would propel them into a life of leisure. They would obtain a good job, have enough money to purchase a home, get married, have children, pay their debts, travel the world, buy an automobile, make trips to the mall to add to their wardrobe and have plenty of money to send their children off to college to do the same thing. Sorry folks! It doesn’t work that way anymore.

What started on Wall Street is spreading across the country. They are camping out because they have student loans they can’t pay for and an education that fails to open the door of opportunity. They are protesting to draw attention to the massive consequences triggered by the greed of corporations. The rich get richer while the middle class and poor remain perched at the foot of the table waiting for the big guy at the table to throw a few crumbs their way.

They are angry because the promise has left them in worse shape. They can’t find work. They can’t pay their bills. All while the government talks about cuts that ultimately impact their ability to pull themselves out from under the load stacked on top of them. They have watched the corporate big wigs receive bonus checks while their companies downsize to assure a profit margin. They watch as Republicans and Democrats argue over raising the debt ceiling. They listen to talk about axing Medicare and Social Security. They wonder about the meaning of the American Dream. They are frustrated and angry because no one in power seems to care that they can’t find work despite the degrees they hold in their hands.

This is the flip side of the Tea Party movement. The baggers are driven by the notion that the country is suffering due to government interfering with business development. They are angry about Obama Care and raising taxes on the wealthiest Americans. They contend that the Obama Administration’s policies have tied the hands of business owners. The taxes make it, in their opinion, inconceivable for them to expand their business. Sadly, most of those who show up at the Tea Bag parties are the most impacted by a lack of revenue to offset the expenses needed to run government.

Occupy Wall Street is a response to the Tea Party movement. These revolutionaries recognize the evil inherent within the corporate culture. Business can’t be trusted to provide a livable wage for all employed. We can’t trust businesses to provide quality health care coverage for all employees. We can’t assume that higher profits will translate into more jobs and more pay. Those jobs may be shipped to another country. Those employed may be laid off and rehired through a temporary agency. Or they could be replaced by a robot or self serve system that makes a human being obsolete.

They are angry due to the changes within America’s work culture. Companies can’t be trusted to honor and respect those who give their time and faith to work until retirement. Retirement parties have been replaced with the annual downsizing day-normally held just before Christmas. How many will IBM layoff this year?

It’s a sad day when you hold a Ph.D. and can’t find a job due to cut backs in education. The market is flooded with highly educated people with no place to go. Our universities are filled with students who have a dream of one day obtaining tenure. There is no place to work. My degree in journalism from the University of Missouri isn’t worth the paper the degree is printed on. The market is filled with former employees of newspapers and magazines who can’t find work. My degrees from Duke and the Princeton Theological Seminary aren’t enough to raise eyebrows. This is the world in which we live. Education doesn’t mean what it once did. I should head to Wall Street to protest the high taxes I was forced to pay for taking money out of my retirement account! Whew, don’t get me started on that subject.

Steve Jobs dropped out of college to become a billionaire. Bill Gates did the same thing. I applaud each for having the genius to build their companies, but what happened to the dreams of those waiting for a piece of the American pie?

Occupy Wall Street may not pay the bills, but it’s time for a new revolution. Until then, take your promise and shove it up your backside!
Posted by REV-elution at 12:00 PM