Searching for the Rainbow 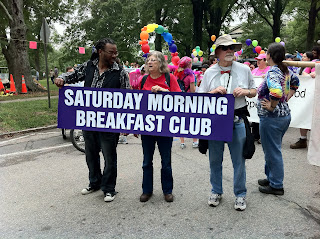 You can’t get to the rainbow until you endure the rain. I thought of rainbows as I walked in the rain. My pants soaked, my path hindered by the drops on my glasses, my feet hindered by the wall of precipitation-I marched with pride.

My tears mingled with those raindrops as I approached the end of the Gay Pride Parade. I noticed the crowd in front of me. They too kept walking. Few ran for shelter as we made our way to the end, one step at a time. I stepped for those hoping to overcome the mean spirited ways of groups fighting to deny them equal rights. The purpose of the march was enough to lift me beyond the annoyance of the rain.

I walked to fulfill a promise. A year had passed since I wrote about attending the Gay Pride Parade for the first time. I vowed to march the following year. It was time to march now. I had members of our Saturday Morning Breakfast Club support me. George Vaughn, Alfred Thorn and Naomi Quinn helped me hold the sign that bore the name of our informal club. Michael Woodard, another member of the club, waved at the crowd from a bike chauffer as we marched from behind.

I’ve been a member of the Saturday Morning Breakfast Club for close to a decade. We gather each Saturday morning at Parker & Otis to discuss politics, places to eat, local events and to check in with one another. We are a family. We have laughed and cried together. It is a diverse assemblage of people who have one thing in common-we all love Durham.

It’s the diversity we love the most. Our Saturday morning talks have elevated my consciousness around the need to take hold of topics beyond the common talks among people who look like me. I have learned to unwrap the protective cloak of my race to walk within the footsteps of people far removed from my own culture. I’ve learned that pain has no color, no gender, class or sexual orientation. My message has been impacted by the common tears at the breakfast table.

My Sunday morning ritual has been altered by those group hugs on Saturday morning. That’s why I asked them to walk with me. I didn’t ask the members of the church I lead because our bond is limited to a common thread that would minimize the meaning of the march I had to take. I wanted to be surrounded by people hurt by the assumptions others make. Naomi, who I call mom, is Jewish, atheist and a cultural anthropologist. Mom has raised two African American daughters. George and Al, a gay couple, have helped me see what love looks like among people of the same gender. Other members of the club bring their own unique perspective. They all wanted to be there to march that day.

Back to the meaning of the rain before the rainbow. I’ve often thought of rain as God’s tears. As I marched I felt a power beyond my own lifting me to a newfound truth. These tears were those that flow from joy. I felt a trimmer within me that rewarded my courage. “March for all the people,” I felt the power within me say. “Feel the command of this rainbow moment. This is what it means when all created by me march because of the love I give.”

In that moment, the chill of the rain against my flesh went away. I walked with pride. I walked with those who celebrated their identity. I walked for a different reason. I toiled the rain, I fought through the fear, I attacked the thoughts of the critics of the worth of the march to declare the meaning of the rainbow after the rain. We are one family Durham.

I walked home in the rain. I looked for the rainbow. I found it. It’s within me.

We are the rainbow.
Posted by REV-elution at 2:40 PM