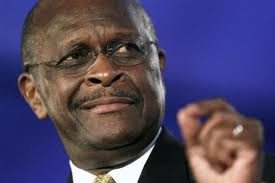 Okay, enough is enough. It’s time for us to pull the hood off of Herman Cain inflated head. As Cain crosses the country to promote his recent book under the guise of running for President, it’s important that we pause long enough to evaluate the significance of his popularity.

Cain is allowed to ride in the front of the bus due to views that strike a chord with traditional conservatives. They would have us think that race isn’t behind his popularity while they hate Obama, but I’m not buying the hokey doke. They are convincing in pleading a case against Obama based on the government bailout of those Wall Street crooks and the auto industry. Those Tea Baggers point to Obama Care as the reason for their disdain. They talk about a deficit and the fear of increased taxes as reasons for needing a change in leadership. All while failing to acknowledge how this ditch was dug after years of Republican mismanagement.

Obama has been called a tar baby, a dick, a boy and the antichrist. The blog sphere is laden with claims that Obama is a traitor. “From the beginning, we've been warning that Barack Obama is an anti-American president,” Robert Trancinki wrote in the Freedom Fighters Journal.

All of those attacks on the legitimacy of an Obama presidency based on, well, the claim that he is not an American, that he is a really a Muslim undercover working to destroy America, that he is a black revolutionary nurtured under the leadership of that fanatic Jeremiah Wright. In other words, this black dude is not really one of us!

Enter Herman Cain. My issue with Cain isn’t his conservatism, it’s how his politics is used to obscure the truth. The truth is Cain serves as that one good black friend brought to the party to demonstrate a lack of bigotry. Allowing Cain to ride on the bus doesn’t confirm a lack of racism among conservatives, but validates it even more. Put another way, white conservatives don’t have issues with black folks who come willing to entertain and validate their unwillingness to change.

Cain is that dude that stands outside of normative black thought. He does so in a way that looks legitimate. He is a graduate of Morehouse College, he as a Baptist minister, he is a gospel singer; he lives in Atlanta, GA. He’s a preacher/businessman who obtained his education from a historical black college. Certainly he can serve as an example of what it takes for black people to pull themselves up from their freaking bootstraps.

We should commend this pizza man for his success as a businessman. I’m certain he does a good job in the pulpit at the Antioch Baptist Church North. I laud him for the books he’s written, but, at the end of it all, Cain is the anti-Obama.

Gloria, his wife, is best known for her Southern Cooking. He brags not about her political insight but her “fork tender roast, collard greens, green beans, candied yams, hand-shucked corn homemade cornbread,” in one of his books. “I’ve also been asked, ‘What about the first lady? Will she be in the mold of Nancy Reagan or Hilary Clinton or Michelle Obama? My answer is ‘None of the above,” he writes.

Cain reflects both the politics and family values more in line with conservative thinkers. His woman stays home and cooks meals. He believes racism isn’t a barrier to success. He’s a good ole boy willing to come to the party organized by those who desire the voice of a black man who agrees with their views on race, politics and the economy.

He’s invited to help those conservatives feel better about their assumptions regarding race and power. If he’s there it proves they’re not racist. There’s one problem, and that is critical to this conversation, he’s there because he plays by their rules. Which proves another point; he has to dance and sing to stay at the party.

“I told you I’m not racist! I support for Herman Cain!” It reminds me of the line I used to get from my white friends. “Darn it Carl, you’re not like the other colored people I know. You’re kinda cool.” Let me interpret the BS in that statement. You’re educated, articulate and not a criminal. You don’t act like the other black people I’ve never met. Why don’t you come to my party?

Cain is that black guy who is invited because he makes conservatives feel better about their assumptions of privilege. He’s the anti-Obama.
Posted by REV-elution at 12:24 PM