The Occupy Movement Spreads to Durham 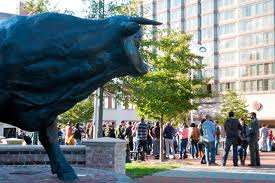 Did you know there is an Occupy Durham movement? Virtually every city in America is being occupied. It started on Wall Street with a call for change. Detractors of the Occupy movement point to the lack of a definite agenda that communicates the concerns of the group. Occupiers have been called a band of hippies, anarchist and social misfits. What those cynics fail to concede is the power in the lack of clarity. The Occupy movement has accomplished what no other precedent demonstration has been able to pull off. It transcends the angst of a specific population.

This movement has caught hold nationally because hurting people have been waiting for a chance to voice that pain. They are past being sick and tired of the hypocrisy of the American dream. They are fed up with witnessing the manipulation of corporate greed and a government controlled by big business. What appears as an assemblage of disgruntled brats is a union made possible by pain that transcends a select population. Those in power should pause long enough to hear the cries of those tired of hurting.

This is more than the movement of black folks hurt by discriminatory practices, a fight for immigration rights, the cry of those who love a person of the same gender or people minimized due to gender. This is bigger than race or class privilege. This movement is the coming together of all who are fed up with the madness. They have tried voting and believed that “Yes, We Can.” It didn’t work. In their minds, it’s time to make them change.

They have watched as the system they believed would change things implodes. They watch as those with the power to alter those conditions care more about maintaining their dominance. They are fed up with the political system. They no longer believe in the schemes established to maintain order. Why? Because those entrusted to manage those systems are incapable of listening to the cry for change.

This movement is bigger than a political agenda. It is more than an attack on the conservatism of the Republicans or the passivity of the Obama Administration. The driving force behind it all is a passion to rid our nation of the bureaucracy hindering the movement toward change. It is a cry to be heard by people who have been waiting to find one another.

More than a revolution around a specific issue, the Occupy Movement is a call to restructure the way we function regarding the management of the nation. That is government’s biggest nightmare. Corporate kingpins should take note of what is spreading across the nation. This is bigger than disdain for policies made on Wall Street. People are ready to capsize systems that fade the value of those in search of change.

The Occupy Movement is akin the Egyptian revolution where millions of protesters from a variety of socio-economic and religious backgrounds demanded the overthrow of the regime of President Hosni Mubarak. Americans assume a detachment from the concerns of those protesters, but we have more in common than we want to admit-uncontrollable corruption, economic issues including high unemployment, food price inflation and the lack of a livable wage

There are also stunning comparisons to the Libyan revolution that resulted in the death of Muammar Gaddafi. Close to 21% of Libyan citizens are unemployed, about one-third live below the national poverty line. More than 16% of families have no family member earning a stable income, while 44% have just one. It is true that Gaddafi created a systems allowing access to free education, free health care and financial assistance for housing; however, the medical system is seen as poor and has become a symbol of the mottled distribution of resources in the country. The lack of decent medical care forces Libyans to seek care in neighboring countries such as Tunisia and Egypt.

The civil war in Libya followed the ousting of long term presidents of adjacent Tunisia and Egypt. Could it be that the flame of discontent has spread to America where the average citizenry is fed up with the lack of a government that represents the people? If so, the paucity of clarity among participants of the Occupy Movement is a matter of immense concern. It’s bigger than one issue. It’s so massive it can’t be put in words.

The movement has spread to Durham, NC. Meetings are underway to build the coalition and to develop a strategy. The group is fighting the City manager to camp out near the Bull on Corporation Street. They’re being told they can protest but can’t camp out. Like the protesters on Wall Street, people in power want to control the way the protest is managed. The last time I checked a protest is supposed to rattle those in power. When you sit-in you get thrown out. When you march you get arrested. When you bring truth to power they turn on the water hose to shut the movement down.

A change is gonna come; one way or another. If the vote won’t fix it, a revolution will.
Posted by REV-elution at 11:17 AM