I Am More Than My Skin 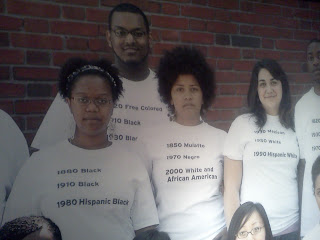 I love talking about race. I’m certain it has loads to do with a mother who has dedicated her life to helping people move past their drama. It takes a special woman to force an entire city to take note of the homeless population. My mama created a place to house the homeless after meeting a few people living on the streets. She hates it when people define others for any reason.

I take great pride in being the descendent of Africans, Native Americans and folks from Ireland. As much as I affirm and celebrate my African heritage, I have no problem with the other components of my identity. Some may call me a mutt. I’d rather think of myself as one complex dude.

It’s the convolution of my identity that gave me great pause while viewing the RACE exhibit at the Museum of Life & Science. It forced a pondering related to the absurdity of this thing we call race. Race is, by the way, nothing more than a social construct designed to divide the human family. It has been used to justify wars, enslave people, segregate them, and to rationalize the stereotypes designed to malign them even more.

That evil social construct has massive historical implications. America is what it is today, for better and for worse, due to the way race has been worn as a way of measuring worth.

My rage boiled even more as I stood in front of the exhibit that told the sad truth about the disbursing of the G.I Bill. Two men, one black/one white, end their tour of duty after World War II in search of a home. The one uses his G.I Bill to purchase a home in a growing community in New Jersey. The other sought to buy a home in the same neighborhood, but was denied due to race.

There is more to the story than the scandal of discrimination. The white man’s home is now valued at $420,000. It was purchased for $7,000. The black man sold his home years later for $9,000. What could have been for the black man’s family if he’d been given the same opportunity?

There was more to witness. I thought of my grandfather when I read the display “I am not a mascot.” My throat dropped as I reflected on my favorite football team-the Kansas City Chiefs.

I considered the massive assumptions connected to my race. I wondered what life would have meant for me if I’d been born with white skin. Even more maddening to me are the deductions of those living with the skin of privilege. They claim race doesn’t matter. That their success is the result of hard work alone and that they are endowed with gifts and intellect that grant them an advantage over the innumerable black people standing in the unemployment line. It’s disturbing that race, more than any other variable, is responsible for the mammoth gap between the majority race and those of the minority.

I walked away from the people I came with, my girlfriend Connie, Larry Crane and his wife Sharon. I stepped away to ponder how a social construct has impacted my own life. From high school when my guidance counselor told me I needed to take up a trade, to the many times I was denied promotion while a person with less experience and education got the gig, to the pile of rejection letters received-I had to ponder if it had anything to do with race.

“Do they believe they are better than me,” I whispered. “Could it be that I have been discounted because of race?” I reflected on the book written by Richard Hermstein in 1994. The Bell Curve argued that intelligence is influenced by inherited factors and is a better predictor of financial income, job performance, chance of unwanted pregnancy and involvement in crime than an person’s parental socioeconomic status or educational level. Bull Do Do!

Race as a social construct has shaped the theory behind public policy implementation. I left both inspired and frustrated by the exhibit. I’m enthused that a place has been created for a larger conversation involving the propositions correlated to assumption we make about race. I’m annoyed that, at the end of the day, people will opt to walk in places of privilege created by the persuasion of their skin.

The good news is discussion groups have been organized to allow people to dig deeper after viewing the exhibit. I suggest that people attend the one organized by the Pauli Murray Project to be held on October 23 at the Stafford L. Warren Library. People need to discuss the power of racial privilege. Minorities need to share thought about the burden of self hatred and inferiority. It starts at 2:30 p.m.

One last thing. I am more than a black man. I am more than my dark hued complexion and long nappy hard locked in memory of my ancestors from long ago. I am more than Claude McKay’s prose about having to die-“”If we must die, let it not be like hogs/Hunted and penned in an inglorious spot.” I am more than Billie’s Blues and Coltrane’s groove. More than Absalom Jone’s plea for the dance of revolution, and King’s dream deferred like that raisin in the sun.

I am the embodiment of Rumi’s love chant-“Only from the heart can I touch the sky”. I have walked in the footsteps of Kierkegaard’s dread and anxiety. Gibran’s words remind me of true meaning-“Beauty is eternity gazing at itself in a mirror.” I am more than man; I am part feminist. I’ve emptied myself to stand with those suffering due to the throb of power clutching their throat.

The RACE exhibit is there to begin conversations. It is up to us not to limit others based on the assumptions we make due to their skin.

I’m more than a black man. My name is Carl. People back home know me as Doris Kenney’s baby boy.

If that's too much to remember-just call me a human being in search of truth.
Posted by REV-elution at 12:06 PM