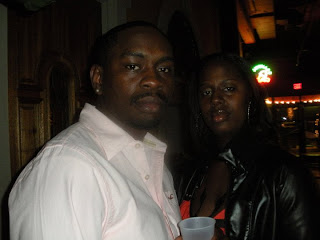 “Durham is known for being the place you go if you wanna kill a black man and get away with it,” Nayla Rudder told me after her boyfriend was murdered. He was the only boyfriend she ever knew. They fell in love when she was 15. I was preparing to perform their wedding ceremony before he was killed.

Their life of love came to a tragic end on June 18, 2011 when a car pulled up next to his and a person inside fired bullets at Michael Hunter. Hunter, 30, drove his car 200 yards until he lost control and crashed into a tree near the Fayetteville Street exit ramp on the Durham Freeway. He was pronounced dead at the scene.

It happened in the middle of the day. “Someone had to see something,” Rudder told me as she fought back the tears caused by the memory of the love she has lost. “The police know who did it.”

She gazed at the daughter left behind. “I have to do it by myself now,” her tears robbed me of the strength needed in that moment. “Another black man killed for no reason.” I nodded my head and counted the love ones lost over the years-Juan Coleman, 27, Jamel Holloway, 27, Lennis Harris Jr., 24, and Jonathan Skinner, 26. I pondered the pain of my friends Lennis Sr. and Donnamaria Harris after receiving word that their son was killed along with three others.

The quadruple homicide that rocked the city happened close to six years ago. Rudder still waits for her own justice. She waits knowing enough, but not enough to put an end to this madness. Like so many waiting for a conviction, the healing can’t begin in earnest until a face is placed on the reason behind their nightmares. The ongoing quest for justice obstructs the ability to release enough to live.

I remember first reading about Hunter’s murder. It was part of a sickening week were two black men were murdered on the Durham Freeway-one on Saturday and another on the following Monday. I read it with interest. I felt sorrow for the families, but then I ran into my friend Nayla. She helped me make the connection that the news article failed to make for me. I knew him. I know her. They are a part of me.

There is a lesson in Nayla’s pain. She shouldn’t have to carry all of that sorrow on her own. The loss of Michael is our loss. There is a teenager who will grow up without a father to show his love. She will grow up aching while doing her best to live according to the expectations of grown folks. How do you study when daddy is gone? How do you maneuver through puberty with the brokenness caused by the loss of your papa?

I watched as Nayla trembled to fight the eruption of tears. I contemplated the list of loses I’ve endured over the years-Tia Carraway, murdered on the 4th of July 2001 while taking a lunch break at Durham Regional Hospital. She was killed execution style on Barbee Road. I shed a tear for my friend. Delia Allen, killed at the I-Hop while waiting to eat breakfast, Keshaun Patterson, 17, killed at the Northgate Mall, two-year old Shaquana Atwater, gunned down while playing in Few Gardens in 1994. The list goes on. Too many tears to count. Too many memories to run away.

I sucked in the pain long enough to be present with my friend. From there I ran to my car to release the ache of two many funerals. “He was the same age of my own son,” I howled in frustration. “He is someone’s son, someone’s nephew, someone’s grandson, someone’s cousin. He is someone’s friend. He’s someone’s daddy, and he is the love of Nayla’s life.

I couldn’t catch the tears. I never can. I allowed them to remind me of my purpose. Even though it hurts we must be reminded that we are connected to one another. Nayla’s tears belong to me. They belong to all of us. Because, deep down, we are just one big family.

Here’s my shoulder Nayla. Cry if you need.
Posted by REV-elution at 12:29 PM