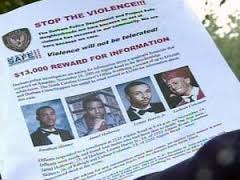 The sobs in the room said more than any statement could make. There’s no way to restore faith in a system that offers a maximum sentence of 44 years for the deaths of four young men.

“How do you sleep at night,” Lennis Harris Sr asked Rodrick Vernard Duncan, 36, with deep pauses aimed at fighting back the tears. “I don’t understand how a man can shoot people that they know, that they grew up with, that you laughed and played with as children, how can you lay them down, look them in the eye and shoot them in the head.”

Duncan pleaded guilty to the execution-style shootings of Lennis Harris, Jr.,24, Lajuan Coleman, 27, Jonathan Skinner, 26, and Jamel Holloway, 27. The frustration in the room intensified when the details of the murders were read.

It’s not enough, members of the families moaned after the plea agreement was announced -36-44 years in prison. The deep breaths could be felt when the district attorney said second degree murder. Not first degree, but something that felt like a devaluing of worth.

Was this the justice the family needed to end the torment that began in 2005?
“I don’t know how to sleep at night,” Stacey Harris, Lennis’ sister and Jonathan Skinner’s cousin said. She talked about the challenges of dating with no brother to talk about men.  “It’s hard for me to trust because of what you did.”

It’s been difficult for the family to move on since that day. Lennis Harris Sr told Duncan he would have been the fifth victim if not for the traffic following a fireworks display at Southpoint Mall.
“You missed one,” Harris said. “I wish I had been there so I wouldn’t have to deal with this.”

Duncan nodded as he listened to the grief he caused. I strained my eyes in search of tears or a body trembling to denote remorse deep enough to help soothe the families pain.
Is it ever enough?

How much does it take to help ease the pain?

Marsha Harris talked about love and forgiveness. She asked Duncan to become an example in prison. She said God has given her the strength to love Duncan.

“I can’t do that,” Lennis Harris Sr said as his wife Donnamaria robbed his back and I handed him another tissue to wipe the tears. “Not now, I can’t do it now.”

Was this the justice the family prayed for when they marched around the police headquarters? Was this enough to balance the rage stirred by years of waiting? Why did it take so long to arrest the three men who interpreted a video game match to kill sons, nephews and cousins that day? What happened to the others involved?

The left side of the room was stacked with members of the family. A few reporters took notes and recorded imagines for the evening newscast. On the right side of the room, a handful of family friends and legal professionals took up a few seats.

“We are in mourning because our sons black lives did not matter enough for the community to protest, rally, demand justice and give up the killers,” Donnamaria Harris, Lennis Sr’s wife, wrote in a text message sent the next day. “We are mourning because the black community only demands justice when a white officer kills a person of color.”

Where are the marches and protest when black men kill black men? Why does the community fall silent, deaf and blind when they know the identities of those who kill black men?

“Why can’t black lives matter enough for people to turn in the criminals who live among us,” Harris writes.

We departed the room with an emptiness roused by a plea bargain that cheapened the lives taken. How much is the life of a black man worth? Why did it take so long, and why this conclusion?
Is it ever enough?

The walk from the eighth floor courtroom to the parking deck was dreamlike movement that hoped for answers in between each step. Each of us wondered what would come next. The conclusion bonded those confused by the sentence.

The nightmare hasn’t ended. The pain we carried into court will follow us the rest of our lives. There will be no march begging for justice. There will be no speeches about the cruelty of a system that attached 44 years as punishment for the death of four men.