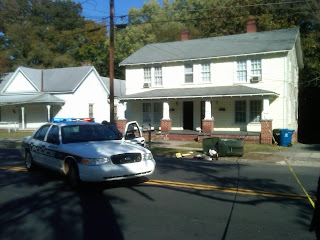 The problem showed up at the meeting. It almost always does. That’s why public meetings don’t solve anything.

It’s the way public officials respond to outrage. Apathy is the word given to express how people feel when dealing with their inner city blues. The police chief came with a gang of officers to show he cares. Elected officials showed up to prove they are willing to listen. Those liberal-minded do gooders show up in an effort to move past the assumptions of their life of privilege. They are all there. There’s more. Those who commit the crimes are also there to remind everyone they aren’t going anywhere anytime soon.

It happened at the recent community meeting to discuss the latest series of shootings on the 200 block of Driver Street. The indignation in the room was exasperated after two children, a 1-year-old girl and a 3-year-old boy, were wounded by bullets fired from a car. A few days later, a man was shot in the buttocks close to where the siblings were playing.

Dominique Hagans, the mother of the children, was at the meeting. People lashed out at city officials for cutting spending. People harassed Police Chief Jose Lopez for failing to attend community meetings. He responded with a classless response. He informed the crowd that he doesn’t have time to show up at a community meeting if only two or three people attend. My response to Lopez, stop making excuses and show up.

This is an old song and dance that has limited progress toward minimizing crime in areas like the 200 block of Driver Street. Folks far removed from the problem read about it in the newspaper and weep for those having to deal with the madness. After a few tissues are thrown in the nearby trash can they go back to their daily ritual of being thankful for their life of leisure.

Then comes the blame game and finger pointing. It’s their fault for not caring enough. It’s part of a racist agenda. They marginalize the poor and pit them against one another to maintain what amounts to a form of modern day slavery. They don’t show up. They don’t care about us….

Watching it all with a smile is the enormous elephant in the middle of the room. No one stops long enough to take stabs at the real culprit behind keeping people locked behind closed doors. It’s the community’s fear of what is in the room that keeps them silent. It’s their silence that keeps them riding the same merry-go-round every time a person gets shot.

The people living within the inner city blues see the elephant in the room. They know who commits the crimes. They know their names. They know the stories behind why they do what they do. They are common fixtures in their community. Some reap profits by selling drugs to their neighbors. Others are gang bangers with grudges based on gang colors and childish beefs.

Those lurking from the outside are quick to criticize people for failing to snitch on these hoodlums. But, back up before throwing stones in a place far removed from your home of privilege. Who will protect them if they spill the beans? If they know, and many do, it is reasonable to conclude that the police are privy to the same information. What happens if they tell and the people guilty of these horrific crimes are set free to go back and get some of that payback that residents fear?

That fat elephant walked into the community meeting to remind everyone he’s still watching. The elephant is there taking notes. Who’s talking? What are they saying? He’s there to remind everyone that he knows where they live. He knows their mama, their daddy and their children, so….you get the picture.

Those community meetings are a waste of time. Change can’t happen until a community is empowered to take control of what belongs to them. They can’t trust the police to protect their interest, and as long as that trust is lacking there is no hope for authentic change.

By the way, there was another shooting on yesterday. It happened on Spruce Street, within a mile of Driver Street. Simeka Daughtridge, 29, died from a gunshot wound to the chest. Police say the shooting was not random.

I’m not saying the shooting of Daughtridge is connected to what is happening on Driver Street, but it certainly adds to the fear among those who are told not to snitch.

You have to get rid of that elephant in the room. Until then, everything else is a waste of time.
Posted by REV-elution at 12:30 PM