Looking for Soul Food in a city consumed with Sushi 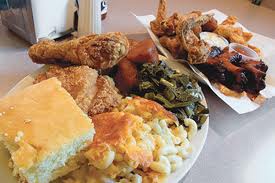 It’s disturbing to me that it’s easier to find a place in Durham with sushi than Soul Food. Don’t get me wrong, I love sushi.  I’ve been to them all - Sushi Love, Yamazushi, Mount Fuji, Shiki Sushi, Sansui, Peony - yes I love sushi.  As much as I crave raw fish wrapped in sticky rice, you would think Durham would be known more for Soul Food.
Nope.
There are a few holes in the walls to keep me happy.  There’s the Chicken Hut on Fayetteville Street across from the Food Lion.  Pan Pan is in the Northgate Mall.  Get this. Pan Pan is owned by an Asian family.   I’m not hating on the owners of Pan Pan, but I’m used to Soul Food being cooked by black people with old recipes from grandma’s cookbook.
The lack of Southern cuisine in a city known for all things Southern is troubling. Back home in St. Louis I’m forced to choose between Del Monico’s and Sweetie Pies.  It’s a shame that the Midwest does Soul Food better than the place known for the Black Wall Street. Could it be that black culture in Durham has assimilated into mass culture?  Is it possible that the death of Soul Food reflects a deeper concern regarding the traditions of black folks living in the Bull City?
With all the chat about Durham being a wonderful diverse community, I’m beginning to wonder what price has been paid for that diversity.  Has Durham become a place that celebrates and honors the mixtures of different cultures, or have different cultures taken over a community that was deeply embedded in black culture?  Is Durham changing due to gentrification?  Has the reconstruction of Downtown Durham combined with the influx of people from other places forced a transition that compromises black culture?
Do people in Durham care?  If not, what happens as a consequence of the apathy related to preserving that culture and communicating the history of Durham’s black community?  Do we even care?  The logical response is to say yes, but consider the truth screaming in our faces.
Exhibit A. Consider Chuck Davis and the African American Dance Ensemble.  It pains me that the organization maintains an office in the basement of the Art’s Council.  Is that the best Durham can do to celebrate the work of one considered a pioneer in introducing African Dance to America?  Shame on Durham for relegating Davis and his company to the basement of the Art’s Council.  Is that the way we honor a living legend?
Exhibit B. The sad state of the Hayti Heritage Center.  It started with a broken air conditioner.  Activities at the center were put on hold because there wasn’t enough cash to keep the place cool.  You have to be kidding me.  How did that happen?  If it wasn't hard enough to find $200,000 to fix the A/C, add the bad news that the nonprofit has to pay back a portion of a Golden Leaf grant due to the misappropriation of funds.
The Heritage Center was awarded $300,000 to develop a “permanent exhibition and cultural tourism trail”.  After receiving $240,000 of the grant, the remaining $60,000 was rescinded after it was discovered V. Dianne Pledger, the former executive director, misappropriated the funds.  Pledger resigned from the center prior to the disclosure of the audit findings.
Those who read this account will be quick to throw stones at Hayti and Pledger, but there is more to this story than meets the headline.  This isn’t about Pledger taking money and funneling it into her personal account.  This is not about a poorly managed organization that needs a kick in the behind for failing to properly handle their business. Pledger got caught up in having to rob Peter to pay Paul, and was unable to get enough money from Jane to give back to Peter.
Hayti suffers due to being undercapitalized.  Why is that?
How does one sleep when payroll has to be covered in there is no money in the coffers to pay those who worked hard over the past two weeks?  How do you sleep knowing the only way to cover expenses is to lay folks off, or, maybe I should.  Maybe I shouldn’t….Okay, I’ll pay them from those restricted funds and pray the good Lord makes a way for me to put it back before it’s too late.
Yes, it’s wrong, but who is to blame for Pledger being put in that position?  We are.  We have failed to support Hayti in a way that offers long term stability.  Don’t we care enough to want more than what has been there?  Durham deserves more than this, and it’s our fault that we haven’t received more.
When I say we let me make it clear what I mean by that resounding we.  It’s the black community I blame.  It’s our history and culture.  It’s our art and music and dance that deserve to be showcased.  We have sacrificed our own by failing to subsidize organizations that reflect who we are as a people.  We may have stopped singing “We Shall Overcome”, but we should never forget the lyrics to that song!
Yes, I love sushi, but every now and then I want smothered chicken with collard greens and corn bread.  If this continues the only thing we’ll have left is the sushi.
Posted by REV-elution at 10:22 AM