I celebrate my Independence Day on Juneteenth 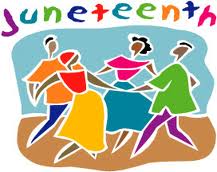 I refuse to celebrate the 4th of July.  I recognize it as a significant date in American history.  I understand why people gather for cookouts, wave flags and meet at the ballpark of fireworks.  It’s up there with hotdogs, apple pie and baseball as things that define what it means to be a citizen of the county that waves the red, white and blue.
I still refuse to celebrate that date.  It would be a lie to do so.  It denounces all that followed that day when a group of men came together to make it official – we became a nation free from the rule of England.  My folks weren’t free yet.  I simply can’t force myself to commemorate a day that fails to tell the rest of the story.
I celebrate my independence on June 19th.  That’s the date set aside to remember the end of slavery in America.  It was on June 19, 1865 that the Union soldiers, led by Major General Gordan Granger, landed at Galveston, Texas with news that the Civil War had ended and that the enslaved were free to leave master’s rule.  It was two and a half years after President Abraham Lincoln’s Emancipation Proclamation announced the freedom of slaves on January 1, 1863.
The Emancipation Proclamation had no impact on Texas due to the small number of Union troops to enforce Lincoln’s Executive Order.  With the surrender of General Lee in April of 1865, the arrival of General Granger and his troops were enough to overcome the resistance in Texas.
That’s the day I celebrate independence.  On that day General Granger read General Order Number 3 to the people in Texas.  It began with:
"The people of Texas are informed that in accordance with a Proclamation from the Executive of the United States, all slaves are free. This involves an absolute equality of rights and rights of property between former masters and slaves, and the connection heretofore existing between them becomes that between employer and free laborer."
Many slaves left before the order was affirmed by their former masters’. With nowhere to go, they left embracing their freedom. Some went North while others sought to find family members in neighboring states.  They fled to Louisiana, Arkansas and Oklahoma.  Since that day in June of 1865, people have paused to remember the struggles of their descendants.  The Juneteenth celebration remained vital in Texas decades later, with former slaves and descendants making an annual pilgrimage back to Galveston.
When Ralph Abernathy called people of all races, creeds, economic levels and professions to come to Washington, D.C for the Poor People March in 1968, many returned home and initiated Juneteenth celebrations. On January 1, 1980, Juneteeth became an official state holiday in Texas.
The Durham Juneenth celebration is organized by Phyllis Coley, publisher of Spectacular Magazine and NC State Juneteenth Director.  Coley has been pressing state legislators to recognize Juneteenth as a state holiday.
People will gather on Saturday to hear local music, enjoy food and hear speeches.  The keynote speech will be delivered by Rev. William Barber II, president of the North Carolina NAACP. Barber will talk about the importance of voter registration and remind people to show up and vote during the fall elections.
The Danish Philosopher Soren Kierkegaard says that life must be lived forwards but can only be understood backwards.  The reality of a particular age may not become apparent until it is drawing to a close. The meaning of that day in Galveston, Texas was not fully understood by those who walked away from a life of subjugation to embrace freedom.  We look back moved by their determination to find meaning beyond what kept them in bondage.
It’s my Independence Day.  I wave this flag of truth.  Lest those who follow from behind forget, we remind them on Juneteenth.
We free now.