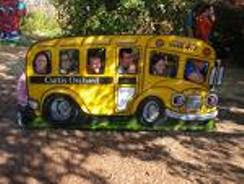 The next time you think about getting down with the homies by riding the city bus, take a few pills and rest until you get over that notion.

In my quest to be green conscious, I have decided to exert more energy into walking and riding public transportation versus jumping into the old SUV to get from place to place. Yes, getting rid of the SUV and purchasing a hybrid is on my list of things to do.

The problem with public transportation in Durham, North Carolina is the amount of time it takes to get from place to place. The system isn’t designed for those who have busy lives. If you want to get from point A to point B you must, and again I say you must, give yourself an hour or so to make the trip.

One can come to expect all of that. What took me by surprise during my journey from downtown Durham to near the old South Square area and back was the total lack of understanding coming from the people who drive and manage the buses.

My story began as expected. I was dropped off at the corner of University Drive and Shannon Road. My destination was close to a mile away on the other side of 15-501. Maybe there was a bus that could have gotten me closer, but hey, I don’t do this everyday. Somebody help a brother out.

I gladly made my way in the ninety degree heat. No problem, I’m in good physical condition and walking is good for you. I took care of my business and made my way back near the corner of Shannon Road and University Drive to catch the bus headed back (one hour later) to the downtown terminal. Since I live downtown, everything seemed easy. I sat waiting and thinking, hey, I can do this.

The bus was on schedule. I made my way to the middle of the bus (I refuse to sit in the back. Rosa Parks fought too hard for me to go back there), closed my eyes and imagined the lives of the other people on the bus.

The bus picked up a woman with child. Things were fine until she screams, “You not going to go to….”

“It’s not on my schedule,” the driver responds.

“Yes it is! You’re supposed to go there. This is the last bus to go there today,” the angry but confident passenger pleaded.

The dispute goes back and forth until the passenger calls the DATA office. I was amused that she had the number memorized. “He wants to talk to you,” she shouts after a brief conversation.

The driver pulled to the side of the road. It was clear from the tone of the conversation that the old adage applied in this case-the customer is always right. She was, so the driver made the detour to take the passenger to the requested place.

The moans on the bus began. “What about us!” a man filling out a crossword puzzle with a pen shouted. I was impressed that he had the confidence to use a pen versus pencil.

“This is Bull _ _ _ _,” another man complained. It didn’t matter. We were headed back. No recourse for those on the bus. No I’m sorry coming from the bus driver who made the mistake.

“I’m gonna miss the 6:30 bus and be late for work,” the man with the crossword puzzle yelled. “I’m getting sick of this.”

Sick of what I wondered. The reporter in me took over. “Is it like this all the time,” I asked.

“Buses break down, sometimes there’s no air or heat,” the puzzle master responded. “We have no option. What else can we do?”

We made our way toward the downtown connection. As we approached we saw the 6:30 p.m. buses take passengers to their destination. “Damn, we missed the bus,” the collective moan of frustration echoed throughout the bus.

As I made my way off the bus to make the short walk to my place, I expected, no, I hoped to find someone waiting to apologize for the mistake. Someone to offer a free ride the next time we decided to use the bus. Someone to say something, anything for the mistake that caused some to be late for work.

What’s the lesson in all of this? There are no apologies and explanations for those who ride the bus. They’re treated like none of it matters.