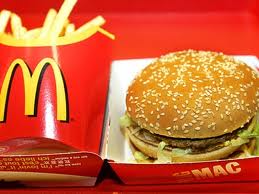 I’m not a fan of the Big Mac.  I can’t stand the taste of those McNuggets and I run from the addictive powers of the McCafé Frappé.  Every time I pass those golden arches I’m reminded of Michael Moore’s documentary “Supersize Me.”  I wonder how much of my gut is because of too many late night runs to sneak some of those yummy French fries.

It’s not just McDonalds.  I deplore all things with the fast food label.  If it has a drive in window, and has a home office in a city not called Durham, I’m the first one out front holding a picket sign while shouting “hell no, we won’t go.”  I’m more of a Whole Foods kind of guy.  If there’s a local farmer peddling veggies and fruits on the side of the road, that’s the place for me.  Give me a farmer’s market and fish from a local body of water over frozen patties that came on a truck from Oak Brook, Illinois.

Promoting healthy choices is on my list of social justice issues.  It’s up there with civil rights, human rights, gay rights, immigration rights, fixing the criminal justice system and economic justice.  I’ve preached about obesity and how poor folks end up with massive health concerns due to the cost to eat.  They purchase what their budget can handle, and often that comes out of a can, or is on the dollar menu at one of the fast food chains.

I’m on that soap box preaching the good news of health.  Can I get an amen to that?  I’m still on the box, but I must admit I’m struggling to keep from falling off.  My pride as a black man is making it difficult for me not to detour over to the golden arches on my way to pick up local grown fruits and vegetables.  This is one of those moments in black history that young people will talk about during Black History Month.  I can hear it now – who was the first black CEO of McDonalds.

Don Thompson takes the reign of the world’s largest fast food chain on July 1. That’s big news.  It’s enough to make a brother pick up a Big Mac.  As important as it may seem, it’s good news that Thompson’s selection didn’t make the news.  The lack of buzz reflects a significant change regarding how black folks climbing to the top are observed as a victory for all black people.  When George and Weezy moved on up to an East side apartment in the sky it was a celebration of the hard work and determination of those fighting to make it to the top.

It came at a time when the images of blacks on television reflected all things hood.  Good Times told the story of a struggling family living in a housing project.  Sanford and Son was about a father and son who made a living by collecting and selling trash.  We celebrated the first to make it to the top.  The first black woman in space, the first black billionaire, the first owner of a pro team or the first black President of the United States were significant moments in the life of a community searching for reasons to believe.

But this isn’t that Big Mac moment.  There’s no line to purchase a happy meal to show support for Thompson.  I say that’s good news, and not because of my disgust for fast food.  It’s good news because there have been enough victories to make his promotion a normal business story rather than the news of the decade.

Magic Johnson becoming one of the owners of the LA Dodgers didn’t make it to the front page.  When Oprah decided to start her own television network no one placed the move in the same camp as Bob Johnson’s start of BET.  We’d been there and done that.  Old news.  It was to be expected.  No biggy.

And that is good news.  Some may regard the lack of coverage as evidence that the press fails to cover stories involving black people.  That may be true in some cases, but this is a different matter.   It’s simply not news anymore, and that’s the real story.  Enough has been accomplished to push the story to the second page in the business section.

That good news alleviates the pressure to head to McDonalds to show support for the brother in charge.  In the past I would have felt obligated to do just that.  Not this time.  I can place my health above the race of the CEO.

Besides, Herman Cain was the boss of Godfather’s Pizza.  Sometimes you can’t tell a dude by his color.
Posted by REV-elution at 12:20 PM