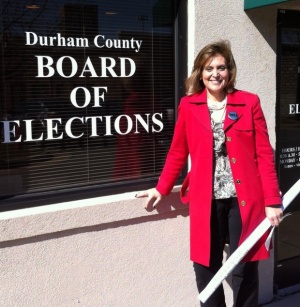 I’ve  heard great things about Kerry Sutton.  I’m told she’s a top notch attorney who fights for folks who fall through the cracks of the judicial system.  It’s hard not to like a woman like that.  Single mom, smart.  There's so much I like about her.

Please pause the video before getting drawn into this movie.  Something is wrong with the script.

My gut is telling me to avoid the Kerry Sutton trap.  On three occasions she has thrown a few curve balls that leave me wondering about what’s ticking inside the woman competing with Mike Woodard for N.C. Senate District 22.  My gut tells me that Sutton’s campaign has been an effort to convince voters to give her the nod due to the failures of others, versus what she brings to the table.

It’s one of those things that vex my spirit.  It’s up there with unloading a fart while at the dinner table and picking your noise before shaking my hand.   I get an eerie feeling when a person has to draw attention to another person to validate their own merits.  I’d rather hear the strengths a person brings to the proverbial table than to market their worth based on the bags the competition is carrying.  It leaves me thinking, “I’m better than what’s his name, so give me a chance.”

The first hit at I’m better than the rest came when Sutton informed us that she should be elected because of a lack of female presence in the Senate.  I’m not disputing her point, and the big girl upstairs knows I’m all in when it comes to undoing the disparity among those who rule the land.  I’m fed up with a bunch of old, white dudes making policy that impacts people they would rather see move to another state.

My problem with it then, and now, is the assumption that her gender alone was enough to convince us to give her the vote.  It takes more than being a minority to validate the endorsement of those tired and confused.  If gender was all it takes, then give me a little space to share my frustration involving the lack of black presence everywhere I look.  Exhibit one – take a look at any news room in the city nearest you.

I can forgive that faux pas.  No biggie.  I placed it in the same file with Obama sharing with the nation Trayvon Martin could have been his son and his spiking the ball on the anniversary of Ben Laden’s death.  It’s one of those tell the truth moments that we need to hear to keep us on track.

Rewind the tape a few months prior to the announcement of her bid.  Sutton started the balls rolling to oust Tracey Cline as Durham’s District Attorney.

She filed the motion.  She pushed the case.  Some may call that setting things right.  It could be argued that Sutton was the only one with the guts to take a punch at Cline.  The big bad bully needed to go down, and she did.  My problem with Sutton’s role in removing Cline as Durham’s DA is the timing of it all.  She took her hit at Cline just in time to position her as one of Durham’s outstanding leaders.  It made her vital.  I’m not implying that she used the dysfunction in the DA office to get attention, but it does leave me with a nasty smell in the room.  Did somebody fart?

Next was the fart that took me over the edge.  It was like little Johnny playing the tattle tale on Jane in my third grade class.  “Mike Woodard has failed to comply with the ethics rules that require all candidates for the General Assembly to provide important economic disclosure forms,” Sutton stated in a press release on May 1. “A candidate’s failure to comply with such requirements can lead to serious penalties.  The State can fine a candidate $250 as a civil penalty.  Criminal penalties also can be enforced if a candidate is found to have provided false information.”

This is the message coming from the Sutton camp the week prior to the election.  Woodard could be fined $250.  Stop the presses.  It’s the scandal of the election! Really?  As important as meeting deadlines are, Sutton’s rant says more about her than it does about Woodard.  I’m better than him because I got my homework in on time.

I’m not suggesting that we minimize the importance of submitting the paperwork.  Woodard, and all other candidates, should comply with the rules of the game.  What bugs me is the work Sutton put into uncovering the mistake.  With all that it takes to get elected, shouldn’t more time be spent in proving to us that she deserves to win, rather than exposing why Woodard shouldn’t be elected.  If all she has is evidence that she is keen on uncovering other people’s mistakes. Well, you fill in the blank….

I need a Senator, not a private eye.  That’s my answer on top of the dots that make a line.
Posted by REV-elution at 11:33 AM