Obama's position on same-gender marriage rekindles "Yes We Can" 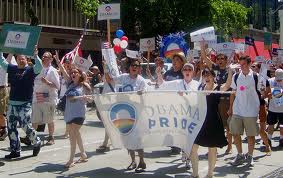 I was grumpy the day after the primary election.  It felt like all hope in living in a country that truly protects the rights of all citizens vanished with one massive stroke.  Amendment One was a colossal blow to my communal vision.

The pain subsided the next day when President Obama said hell to the no to North Carolina’s conception of what it means to be America.  “It grew directly out of this difference in vision,” Obama explained.  “Are we a country that includes everybody and gives everybody a shot and treats everybody fairly?  Does that make us strong?”  Obama is correct to assert that support of same-gender marriage is an extension of what America is supposed to be.

Obama’s out of the closet political experience could not have come at a better time.  It was the much needed band-aid for those aching after the hillbillies in North Carolina defined marriage as a union between a man and a woman.  The issue has been a hot potato for politicians desiring to keep their liberal base while not miffing the Biblical literalist who believe God speaks in King James English.

Obama had to face the harsh reality of black folk’s homophobic ways.  Among those most prone to ride the Obama bus, support for same-gender marriage was like selling a ticket to a Klan rally.  As liberal as black people are on social matters, they are hardliners when it comes to the way they approach the Bible.  It’s a mystery among progressive minded ministers who take seriously the need to break through all forms of exclusion.

It took courage for Obama to rise above the madness and give the nod for same-gender marriage.  His failure to do just that had left former supporters on the fence about the upcoming election.  To vote, or not to vote – that was the question.  The lack of a courageous stance made it difficult for people to embrace the message of hope when it came with grim limits. Justice only applied when devoid of political suicide.

Many may ask, what took Obama so long.  At the end of the day, what matters is that we are finally here.  The result has been an outpouring of Obama love unlike anything we have seen since that cold day at his inauguration.  Most of what we have witnessed has been on a slippery slope.  From the Obama surrender of the one payer option during the heath care talks, to those corporate bailouts, that oozy feeling that had us screaming “Yes we can,” became a collective “what you doing?”

As much as we understood Obama’s scraps with those mean spirited tea baggers and Republicans, we wanted a more vicious Obama.  We wanted to see a black dude from the hood take them out like Bruce Lee did Han in “Enter the Dragon”.  We wanted to see Obama slap them silly and put them in their proper place for all the abuse we’ve felt from their injudicious policies.

Commentators measured him up as weak and over his head.  Others saw Obama as the reincarnation of the old political diversion we were hoping would go away.  Yes, we can!  A black man will fight.  He understands how it feels to be on the bottom with no ladder to climb out from the whole.  That’s what we thought, but, but, but.

As a black man, I simply couldn’t keep the brother hanging.  I was rooting for him despite my concerns.  No, it isn’t all because he’s black, but it has more to do with understanding what it feels like to be a black man in a world with old white dudes who refuse to listen to what you have to say.  It has more to do with the double standard of judgment used to define success and failure, and the covert messages coming from those who label Obama a misfit and failure.

It hurts witnessing conservative Christian flaunting love for Mitt Romney after a century of tagging his faith a cult.  It is conceivable that they will support an elder of a group they consider outside the faith they claim over a man within the purview of their faith.  It reveals the hypocrisy of those who hide their racism with scriptures.  I can’t let my brother go down like that.  I know a bigot when I see a bigot, and it’s time for a slap down long overdue.

Ring the bell.  Let’s do this thing right.  Take off your façade and let’s be real about what this is all about.  Stop playing games with what irks you the most.  I’m sick of all of this pretension.  Call a spade a spade.  This has long been about how we define what this country means.  Tell me the truth!  You’re mad because a black man is in control.  You’re mad because he’s running the show, and you get even more irritated when he refuses to play by your rules.

That’s what makes this a new day.  Obama’s position on same-gender marriage takes the power out of the hands of those who strangle him with assumptions.  He is a liberal in the pocket of the gay community.  That’s what they have wanted to say.  No, that is what they have stated.  Good for you Mr. President!  Say it loud! Take the power away from them and tell them yes I am.

And now that you have stated it clearly – YES WE CAN!
Posted by REV-elution at 12:59 PM