The confession of a Crystal Mangum supporter 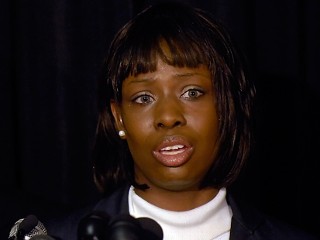 In most cases that is true.  Men use the privilege of patriarchy to dominate the lives of women.  It’s a lesson I learned in a feminist class I took at the University of Missouri.  Men suck.

That lesson learned long ago has haunted me ever since.  Given I’m a black dude; I’m able to hide behind the wall of race whenever the roll call for injustice is made.  I’m forced from behind the wall of race to fess up to how black men have done black women wrong for as long as anyone can remember.  Fighting to overcome all of that is a real challenge.  That’s my confession.

It’s why I wanted to prove that Crystal Mangum wasn’t fibbing when she said she was raped by three white lacrosse players from Duke University.  I was one of the first to rise to the occasion by both writing and marching about the need for justice.  It was that rare story that forced a serious pondering related to my role as a journalist juxtaposed against my calling as a minister.

She had to be telling the truth.

My first response was disgust.  I placed all impartiality to the side due to the countless other women I know who have been raped and taken advantage of by men.  I was outraged and intent on standing in solidarity with Mangum.  Before I wrote, I had to make a personal statement. I took a trip to that house on Buchanan Street and took a piss near one of the windows.  I marked my bold protest.

I then took to writing. I spoke to other women who have endured rape.  I interviewed a former exotic dancer who shared the horror of working private functions like the one held by the lacrosse team.  I was inflamed with rage because of an assumption I made – no woman would lie about being raped.  It had to be true.

I held my pen in one hand while marching with the crowd in protest.  It was hard to make that separation.  I carried the tears of my sister who was raped in high school. I held with each footstep the image of my father coming home to get his gun to find the man who violated his daughter.  I remembered standing in pride of the man who loved enough to take justice in his own hands.  I was too young to ponder what could have happened next.  Each step was for my sister.

Each beat of my heart considered my mother’s pain.  I knew the years of abuse she had overcome.  I knew the unyielding damage done after her mother died due to her birth.  I knew the violence of the men from her past and the tears often shed when she thought no one was listening.  Mangum had to be right.

It was the story to expose all of that pain.  Finally, I felt, black women’s burdens appeared on the front page.  I wrote and marched because they had finally overcome the avoidance of their pain.  This had to be true.  I wanted it to be true. There was no way for it not to be true.

After fighting for Mangum’s right to be heard, and believing something unspoken happened on that dreadful night when she came to take off her clothes, I have a confession.  I was wrong.  I jumped too soon on the bandwagon to tell the story of black women’s pain.  Mangum was set up to be their spokeswoman.  She was supposed to be the victim of a long legacy of race made worse by class and gender.  She was supposed to pave the way for others to be heard.

It had to be true.

Years later, I’m forced to concede the truth.  Mangum is a victim.  She is the victim of her own image of victimization, and she is surrounded by people willing to cultivate her need to be the victim.

If we are to believe her now, men are behind all the bad that has come her way.  Three time now. Three, count them, three occasions were trouble befalls due to the ways of men.  That could be true, but, if it is, at the root of it all is how she places herself in positions that make her the victim.

Strike one was the accusation of rape.  I wrote that we should not judge her for being an exotic dancer.  I, along with so many others, brought to the forefront her academics.  We challenged people not to discount her humanity based on her profession.  We recorded instances of injustices that forced women like Mangum to lean on the cravings of men to provide for their children.  She claimed the men in that room took advantage of her.

Strike two.  She burned the clothes of her boyfriend in a bathtub and threatened to stab him.  She was charged with attempted first-degree murder, five counts of arson, assault and battery, communicating threats, three counts of misdemeanor child abuse, injury of personal property, identity theft and resisting an officer.  Her claim – it was his fault. She was convicted of child abuse, vandalism and resisting an officer.  Abuse was her defense. She claimed a need to defend herself after ongoing abuse.

Now it’s strike three.  This time it’s murder. She’s charged with the murder of Reginald Daye, 46.  Police found Daye with one stab wound in his torso April 3 at Mangum’s apartment.  Mangum was charged with murder after Daye died April 13.  She claims she stabbed Daye in self-defense after he punched her, dragged her by her hair, kicked her and continued to abuse her.

Each case declares the cruelty of men.  One strike, two strikes, three strikes, you’re out.  As sad as it is to consider the possibility of a person being abused over and over again, at some point those on the outside have to wonder about the judgment leading up to that cycle of pain.  Are we to assume that Mangum simply finds herself engrossed in bad situations, or can some of the blame be caused by her own dysfunctional ways?

Such is the life of the victim.  They repeatedly relive the same nightmare because they keep going back to the scene of the crime.  If you keep doing stupid things, the consequences of that stupidity will keep biting you in the ass.  We can’t discount the cries of the innumerable victims begging to be heard, but once heard we should challenge them to move past the limits of victimization.

Adding to the crisis of victimhood are those willing to take advantage of those too weak to see past what they have created.  The cast of characters following the Mangum case embody the tragic end for those needful of a stage to remain relevant.  Mangum’s tragic story becomes the centerpiece for a broader discussion related to how the juxtaposition of race, class and gender can impede the progress of those who go to battle with those who have all the toys.  Mangum is used as an example of how one can fall after attempting to expose the ruthless ways of white boys with more than enough money to fight.

It’s why we wanted it all to be true.  We needed for her to be raped.  Some refuse to accept that maybe it was all a lie.  In coming to Mangum’s defense they do more damage than good due to the methods used to make their point.  By continuing to make her case about what happened with those boys from Duke, she confronts the tragedy of having to prove the worth of that former claim.

By fighting her case during a press conference, Mangum’s supporters negatively impacted her defense in the murder case.  The Committee on Justice for Mike Nifong met with the press leading up to Mangum’s hearing.  Their press release exposed the claims of the defense. That “the medical examiner, prosecutor, or defense attorney, by respectively filing a fraudulent autopsy report, prosecuting baseless charges, and offering up no substantive defense, acted in good conscience and in the interest of justice,” the release stated.

The actions of the committee led Chris Shella, Mangum’s attorney, to withdraw from the case.  “These individuals have disclosed these documents to the general public along with the potential defense theory of the case,” Shella stated in his motion to be removed from the case.

Those prompted to support Mangum further led her into a more tragic state of victimhood.  Now she has to wait on a court appointed attorney.  It’s what happens to victims – one bad thing is followed by another, then another, and it keeps on going.  When does it come to an end?  What can we offer Mangum to support her in overcoming the demons in her head that drive her in making the same mistakes?

Mangum may be innocent of killing Daye.  It’s conceivable that his end was an act of self-defense.  It’s plausible that Mangum burned those clothes in the bathtub due to the rage correlated with abuse.  We could even assert the possibility that something happened that night when she took off her clothes.  One theme is consistent in each incident – Mangum placed herself in harm’s way.  No, I’m not blaming victims; I’m questioning the credibility of Mangum being the poster woman for other women grappling to overcome the clutch of patriarchy.

At the end of it all, it may be proven that Mangum needs more than what can be garnered in a criminal decision.  This may be about the trauma among those who endure rape and domestic violence.  Ways need to be found to help women like Mangum move past the life of victimization.  Otherwise, the cycle continues until there is nothing left to hope to change.

I needed it all to be true.  The truth would have paved the way for great work in the cause for women’s rights.  She was a victim, I thought.  I’m not sure that’s not true.

So, here’s my confession.  It’s possible that we too are the victims in this case.  Our quest for it all to be true leaves us frustrated that we can’t prove the validity of these claims.
Posted by REV-elution at 12:59 PM