The nation's love affair with John Edwards comes to an end 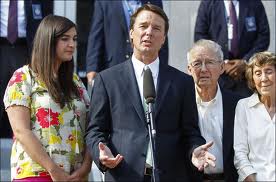 I’m still shaking my head after the John Edwards verdict.  This is one of those OMG moments followed with an old fashioned SMH.  He was found not guilty on one count, and the jury was hung on the remaining five.

It’s not the verdict that has me yelling at God, it’s the situation.  The more I think about it, the more irritated I get.  The stuff that has me fuming isn’t about old dude getting his freak on with a hussy holding a camera.  It’s the fact that he smiled in our faces while giving a pitch on his being the best man to lead the nation.

Don’t get me wrong. I’m no prude.  I have so many bags that I can’t board the plane.  I’ve done my share of things I want to hide.  Most people do.  I’m not admitting to doing anything wrong, but I’m not denying that I have.  Put another way, that’s my own business.  Stay out of my business and I will keep my snout out of your mess. Deal?

I have sense enough to understand the implications connected with smiling before the people with sweet mama sitting in the front row.   I’m not condoning Edward’s for getting his mistress pregnant, convincing his friend to lie about the baby being his and paying loads of cash to make it go away.  That’s foul to the 100th degree.  It’s the kind of drama that reminds me of discussions at the picnic table during a family reunion.

Edwards is correct to assert that he has done his share of wrong, and that he has to contend with his own sins.  It’s the worst case of one bad thing leading to another sense King David decided to hook up with a chick name Bathsheba. The story from the Hebrew Bible is a reminder that even the best of men and women get caught up in situations that leave you wondering about their state of mind.

The nations love affair with Edwards came to a swift end.  I wasn't prepared for what came after the National Inquirer spotted Edwards being too intimate with that woman. I understand why people have a hard time dealing with why Edwards did it all.  How could he while running for President? How could he with a sick wife?  Those are questions we may never resolve, and the truth is it’s up to Edwards to deal with all that.  He is correct to assert that he is accountable for his own sins.  With all of that on the proverbial table, there’s more to ponder, and it’s not Edwards we need to consider.  It’s the American mentality.

Maybe this case reveals the massive assumptions that lead to our love affair with people like Edwards.

Why did people love him so much?  Was it the very thing that got him in trouble – his look and charisma?  Was it his message or haircut?  Was it his climb to the top of his profession or was it his place on the top?  Was it the man so many loved, or was it the image of the man and how they wanted to be just like John?

Those who endorsed Edwards loved what he represented.  Edwards rose to the top of his political class because of all the intangibles that we refuse to admit we love.  We love putting our faith in millionaires with nice hair who woo us with talk about caring for the poor and ostracized.  It all seems so real.  Is it? Have we been tricked into believing all that hype while Dr. Jekyll is around the corner waiting for Mr. Hyde?

This hurts because of how it reveals what it takes to get in the good graces of Americans.  You can pay for an image.  If you have enough money you can trick people into believing you are a different person.  A cargo of cash combined with a good public relations firm is enough to get your name on the ballot to become President of the United States.  You can make those mistakes go away with enough cash.

This is what comes with money and power.  This is what we have created.  We want perfect people leading the way.  When there are skeletons in the closet you can pay to make it all go away.

OMG.  Who can you trust when money can make it all go away?
Posted by REV-elution at 1:37 PM