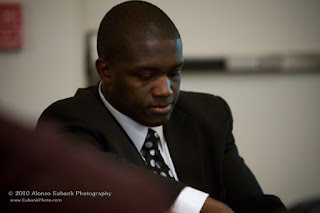 “I always presume the best of people until proven otherwise,” Phil Cousin, chairman of the Durham Committee on the Affairs of Black People, was quoted in the article written by Gronberg. “What would the political season be without some chicanery? This appears to be an effort to confuse people. The committee clearly endorses Judge Hudson, and we stand by that endorsement.”

Gronberg reports that Butch Williams, a local attorney who supports Hudson, received the tip regarding the flier from Darius Little and Thelma White. Williams says he later received “five of six (copies) from other sources”.  After raising a clear case for the possibility that Dornfried is behind the shady flier, Gronberg attacks the credibility of the two people who exposed the problem.

“White is a neighborhood activist and longtime ally of former County Commissioner Joe Bowser,” Gronberg writes.  “Little is a convicted felon who’s been trying to make his way into local politics. He ran unsuccessfully for a City Council seat in 2009,”
One has to wonder about the motivation behind the references made.  Did Gronberg use Whites connection to Bowser to discredit her credibility in the minds of those glad the former commissioner got the ax during the primary?  More significant is Gronberg’s comment about Little.  What does his criminal record have to do with this issue?  How does the mention of that past serve readers, other than to diminish Little’s claim based on his past?  More appalling to me is how the Herald-Sun continues to wave Little’s criminal record before readers as a way to negate his right to engage in the work that is so important to him.
Is Gronberg implying Little and White created the fliers themselves?  It’s a suggestion that could easily enter the minds of those familiar with Bowser’s past and Little’s criminal record.  Could this be Gronberg’s way of saying what he couldn’t say?  Is Gronberg suggesting that voters should be suspicious of anything connected to Little and White?  Why not? One followed Bowser and the other is a criminal.
Yes, Little has a criminal record.  It’s a matter that has received considerable reporting.  No, Little is not a perfect person.  He, like so many in the public arena, has his share of baggage.  He’s made his mistakes.  He’s paid the price for those mistakes. Give him a break.  Look at what he is doing today.
Rather than mention Little’s role as a member of the Durham Committee of Black People, Gronberg mentioned his record.  He doesn’t mention Littles involvement with People’s Alliance. Little is one of the few people involved with both the Durham Committee on the Affairs of Black People and the People’s Alliance.  Gronberg didn’t mention his work with the Durham InterNeighborhood Council.  He was so quick to throw out his criminal past that there was no mention of the work he has done to make a difference. I’m not holding Gronberg accountable for failing to mention all of Little’s achievements.  I do feel it necessary to weigh the significance of his criminal record against his community involvement.
What Gronberg did to Little transcends an attack on his character.  It raises serious questions related to what it takes for people who have criminal records to gain respect after they have paid that debt to society.  What does it take for us to stop reporting on their past?  How much does Little, and people like him, have to do for us to stop slinging his past in his face whenever they find themselves in the middle of an issue?  How does it feel to read the paper with that line next to your name – convicted felon?  How would you feel after working to contribute in making a difference only to read that you still are responsible for that past?
Gronberg’s mention of that past wasn’t essential to this story.  The only bearing it has is to question Little’s credibility. Readers should hold the press accountable whenever we take a walk done that street.
Little deserves better than this.  He’s working hard. We often disagree, but I give him credit for being active and informed.
Leave the brother alone.  He has the right not to have his past beside his name every time he shows up to make a difference.