Zimmerman arrested: Is it over now? 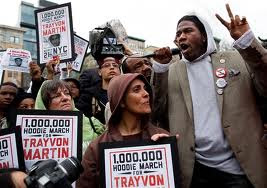 It seems like an eternity. The nation has been waiting for what appeared inevitable - the arrest of George Zimmerman for the death of Trayvon Martin. On yesterday, Florida State Attorney Angela Corey announced that Zimmerman, 28, had been taken into custody and was awaiting arraignment on a charge of second-degree murder in the death of the 17-year-old. Zimmerman could face life in prison if convicted.

The unfortunate death of Trayvon has spurred outrage and a national debate about police profiling, the stand no ground law, gun control and racism. It has been the catalyst behind a national eruption of emotions. This tragic nightmare has become the platform for all that aisles black folks.

The message behind it all is simple. I told you so.

Black and white fingers have pointed in the direction of injustice with a resounding I TOLD YOU SO. What was told: that racism continues to destroy the lives of black boys. Systems are created to minimize and fracture the dreams of black people, and that all that progress taunted among those on the conservative right is a bunch of hot air blown to soothe white guilt.

This death has become a vehicle carrying copious agendas. Trayvon’s demise launched a movement that rekindled thoughts of past revolutions. This death fueled the pain of countless mothers and fathers. This death served as a collective I told you so budding in the hearts of those traumatized by what they felt was true. Black folks have not overcome yet. It’s the message rendered helpless by public policies and legislation that countered those claims.

Black folks have overcome. No we haven’t. I told you so.

So, is it really over, or has the real revolution for change just begun. Will Trayvon’s death move beyond an attack on a man who allegedly murdered a black teen for no other reason than his race? Will the focus be on Zimmerman’s trail, or will Trayvon’s death remain exhibit A in the case of black folk’s pain?

If the answer is yes, we will use this death to unveil America’s unfairness toward black folks, can it be said we use this miserable death to prove that I told you so? Can it be argued that we kill Trayvon, over and over again, by manipulating the calamity of his end to promote a larger agenda?

If Trayvon’s death is about the racism of Zimmerman, is it an act of justice to make Zimmerman’s bigotry to confirm America’s problem with race? Is it credible to take the errors of a few to gauge the intentions of all who carry the same hue?

If the answer is no, then how does this death serve us beyond the arrest and impending trail of George Zimmerman? Can death be used to inspire change? If so, how? Now that the arrest has been made, what happens with all that collective pain not ready to stop marching? How do you turn the faucet off when enough water hasn’t been poured to baptize the soul of America?

When you stop and think about it, the angst is connected to those questions. I told you so goes much deeper than Trayvon’s death. God knows we grieve for Trayvon and his family. How many more do we know? How many funerals have we endured? How deep is this pain?