Haiti: A Call to Serve 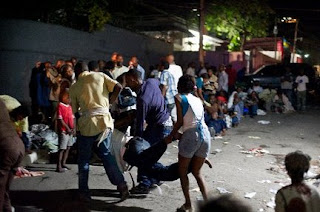 I’ll never forget the day my mama taught me how to be mission minded. I was preparing to leave for school when a taxi pulled into our driveway. My mother goes into the garage where luggage was waiting, comes back into the house to inform me and my father she was leaving to go to Haiti. We both stood in shock as the taxi pulled off to take my mother to the airport.


I thought of my mama’s trip when I heard of the earthquake in the most impoverished nation in the Western hemisphere. She returned with stories about the people she met there. She talked about the beauty of the country and her experience with voodoo. She was moved by the power of the worship service which ended with a chicken being decapitated. Haiti changed my mother, but not because of the landscape our rituals of the people. It was the poverty that opened her eyes and paved the way for her work as a true catalyst of change.


From her work with women to the founding of a homeless shelter back in Missouri, my mother’s trip to Haiti began my own journey down that lonely road of doing all I can to make a difference. There was something in her eyes when she returned that forced me to rethink the decisions I would soon make. Those pictures of the poor would not let me sleep.


I called my mother after the earthquake. I asked her about Haiti. Her response was simple, “You know I went there,” she said. “It hurts so much.” Then a pause. “My God it hurts so much.”


My friend Glenda Jones called just before I made that call back home. Her call reminded me of one I received after Hurricane Katrina struck the Gulf Coast. Back then Inga Willis and Sima Flower, owners of Peace Fire Galleries, called me disgusted by the lack of attention given to the horrific pictures that consumed us-people unable to get off roofs. Pictures of dead bodies floating, children crying and senior citizens dazed by it all. One gloomy image after another left us feeling mortified and disgusted by a lack of movement.


We moved to the streets crying for help. We stood there begging people to help in some way, any way, to put an end to the pain of our brothers and sisters down there. We held buckets to collect money. We had no permit. We did not know we needed one. Soon, donations came and an organized followed and hope took over. Glenda’s voice was another call to move.


“We will be taking donations on Saturday,” she said. “We want to collect items for babies. Will you help?” Of course I will. I called my mother. When I hung up the phone I cried. I cried because of the sound of my mama’s voice. I could tell she wanted to go back. I knew the faces of the orphans she visited while there came to mind. I knew she thought of all the poor people who now had to endure even more pain.


So, items will be collected on Saturday at Glenda’s salon-Sincerely Yours at 2718 Hillsborough Road (next to Merchants Tire). They will collect items to be shipped from 10:00 a.m. until 4:00 p.m. The drive is in collaboration with the Family Health Ministries, a charitable organization based in Durham, NC that provides medical care in Haiti with 70 volunteers in the country. Family Health Ministries will ship the items to Haiti.


The number at Sincerely Yours Salon is (919) 286-7777 or call Liz at (919) 260-0357. It happens tomorrow, January 16th. It’s interesting it all happens on the weekend of the Martin Luther King, Jr. Birthday celebration. What better way to honor Dr. King than to participate in a cause that he would have encouraged.


Yes, it hurts so much mama, but you son will do what he can to do what you taught him to do.


Take that Pat Robertson.
Posted by REV-elution at 1:00 PM