Lopez: I was there to help the children 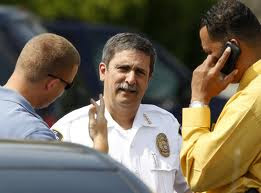 “I don’t have a gang, I have a team,” Jose Lopez, Durham’s Police Chief, corrected me during a recent phone conversation. He was correct to bring to my attention that I used the term gang to describe the police in my last column. I used it to express the angst among many who view the police as street thugs in uniform. Okay, I went a bit over the top with that one.

Lopez went on to set the record straight about a comment he made at a recent meeting held at the Shepherd’s House United Methodist Church on North Driver Street. The meeting was called after two toddlers were hit by stray bullets shot from a car. Residents near the shooting are outraged by the events leading up to and following the shots.

In my blog (“Shootings on Driver and Spruce St Force a Discussion about the Elephant in the Room”) I argued that meetings such as the one held that night at Shepherd’s House UMC is circumvented by the presence of known criminals in the room. Those thugs show up intentional about distracting the conversation away from what really matters. To that end Lopez brought insight to why he was present that night.

He informed me that his primary concern in being there was to offer parents resources for their children due to the trauma caused by the shooting. “It was turned into a time to blast the police,” he says. Lopez is rightfully concerned that children may be missing the help they need due to the way the purpose of the meeting was shifted.

Lopez also clarified a statement I made regarding a comment he made. I wrote “He informed the crowd that he doesn’t have time to show up at a community meeting if only two or three people attend. My response to Lopez, stop making excuses and show up.” Lopez stated that his concern is that residents do the ground work necessary prior to the meeting. Members of the Durham Police Department are encouraged to attend community meetings. To gain the most out of those meetings the residents need to partner in a way that assures the maximization of the police departments resources.

The Chief made it clear that he knew the elephant was in the room. “We know who they are,” he stated. “Residents need to find a way to slip word to a member of the police department when they see a person in the room.” In other words, a way needs to be found to keep those elephants from showing up at community meetings. Lopez suggested that they not be invited.

But, let’s go back to the most important point Lopez made. Like the Chief, I’m concerned that parents left void of the services their children need. The trauma created due to violence can have grave implications on the mental health of young people. It is troubling that a more concerted effort hasn’t gone into helping to communicate the services available to those who need it the most.

Lopez indicated that he was present to promote the work of the North Carolina Coalition Institute (NCCI). The police department has partnered with this state project to offer counseling to youth. I wonder how many parents have taken advantage of those services. I wonder how many consider what is happening as normative for a child growing up in their neighborhood?

It’s not normal. It’s traumatizing and needs to be dealt with swiftly. Parents should to be made aware of the $5.4 million grant awarded The Durham Center. The Center for Child and Family Policy (CCFP) at Duke University helped The Durham Center secure the six-year federal grant from the Substance Abuse and Mental Health Services Administration (SAMHSA). The project, called BECOMING (Building Every Chance Of Making It Now andGrown-up), focuses on services for 16- to- 21- year-old youth moving between juvenile and adult service systems.

What that grant fails to address is the growing population of youth suffering with Post Traumatic Stress Disorder (PTSD). Services are offered through The Center for Child and Family Policy (CCFP) at Duke, the Carolina Partners in Mental Healthcare and the Carolina Partners in Counseling, but have parents found a way to access these services? And, if so, are parents able to afford the price?

Solving and reducing crime is the job of the police department. Chief Lopez brought has brought to the forefront an issue that can’t be placed on the backburner. The youth who witness crimes need counseling.

Maybe it’s because the Chief knows what happens when young people fail to receive mental health services. He locks them up down the road. Maybe, just maybe, some crime could have been avoided if that person locked up had received some counseling years ago.

In the meantime, let’s try to stay focused the best we can.
Posted by REV-elution at 2:35 PM