Youth Deserve Our Support of the Arts 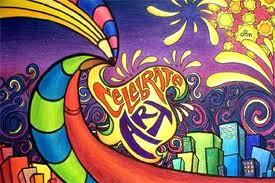 I’m thankful for being the son of artistic parents. My pops introduced me to sketching at a young age. I can’t remember not drawing. It safe to say it’s in my bones. My mom’s flare for the artistic is reflected in her skill as a seamstress. She’s known for designing and making clergy robes.

It’s my contention that there is a deep correlation between the arts and stimulating the mind to learn. Be it playing an instrument, writing a poem, choreographing a dance or painting a landscape - the arts unlocks the imagination to a world hidden by a lack of clarity. Young people learn more when the arts are used to penetrate those places not tapped by science and math.

So, forgive me for being a bit unbalanced when I attend a high school football game to witness a band with fewer than 50 members. Forgive me for shouting out loud when the middle and high school doesn’t have a jazz band. Go ahead and yell back at me when I argue that we shouldn’t have a school of the arts in Durham. I simply have no patience for minimizing something as important as the arts to a few schools within the district. Every school should be a school of the arts.

Bringing further insult to my rapidly rising blood pressure is the lack of support for nonprofits dedicated to teaching the arts. Many Durham gems are grappling to survive due to a declining resources coming from corporations, foundations and citizens. One of those gems has faded into that place where organizations become the subject of discussions of what used to be in the good ole days.

SeeSaw Studio recently announced that it will end its independent status as a nonprofit organization at the end of this year. Founded by Steven Wainwright in 1998, the program teaches youth to become designers. They are taught print, craft, textile and industrial design skills with the assistance of an entrepreneurship coach who helps them turn their skills into a business.

Despite the great work at SeeSaw Studio, they have been forced to terminate their nonprofit status due to the cost to survive. The decision comes after Michelle Gonzales-Green, executive director, was named an Afterschool Ambassador by the Afterschool Alliance. The Washington D.C. based organization was established in 2000 by the Charles Stewart Mott Foundation, the U.S. Department of Education, J.C. Penney Company, Inc., the Open Society Institute/The After-School Corporation, the Entertainment Industry Foundation and the Creative Artists Agency Foundation to ensure that all children have access to affordable, quality afterschool programs. Gonzales-Green is one of only 20 named an ambassador nationwide.

The distinction positions Gonzales-Green to facilitate afterschool efforts nationally. It also exposes a sad truth related to Durham’s inability to embrace and support those numerous gems in our own backyard. Rather than utilizing the gifts of those in Durham, we tend to look for models in other places-like Harlem. It just proves that old adage to be true-a prophet is of no honor at home.

The good news is that the work at SeeSaw will continue through the efforts of Spirit House, another local nonprofit dedicated to nurturing the gifts of youth. Nia Wilson, executive director at Spirit House, has a long track record of reaching those often forgotten by the grant writing pimps. That’s the moniker I use to describe those who stampede poor, black and brown communities with their new improved version of yesterday’s promise for change. They bring a few bucks, a staff with degrees and past accomplishments and a sales pitch about how things will be different after we take a bite. I’ve already eaten that sandwich.

All while people like Gonzales-Green and programs like SeeSaw are doing the work that transforms lives. They lack the proper connections that lead to the level of support necessary to continue the work. A difference is made, but its old news in an environment more prone to embrace an unproven entity. The community engages in deep dialogue regarding what needs to be done to motivate youth while the answer is there waving at those with the deep pockets.

People simply don’t get it! You inspire youth with the arts. They become motivated upon discovering their ability to create. That is the unspoken truth that the leadership at Durham Public Schools, those who support the East Durham Children’s Zone and those grant writing pimps are too blind to see. Stop reducing funding for the arts. Find ways to support efforts that inspire youth to create. While you’re at it, find a way to make the arts a priority in all our schools-not just a few designed to convince white parents not to send their children to the charter school du jour.

It’s a shame that SeeSaw, as we have known it in the past, is gone. If we’re not careful the Walltown Children’s Theater will be next. After that it may be the Collage Dance Company. Three amazing programs that are recognized nationally for the work they do.

Too bad folks in Durham seemly don’t care. It’s too close to home to be appreciated. Oh, it’s the arts.