Is Big Brother Keeping House at Bank of America? 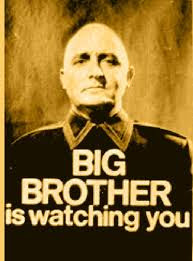 The agency has a whopping budget of $41 Billion for fiscal year 2012 and employees 230,000 people across the country. The Department of Homeland Security combines the functions of 187 federal agencies and departments. Many consider it the realization of George Orwell’s novel 1984. Orwell describes a nation where everyone is under complete surveillance. They are constantly reminded that they are under constant examination by the phrase “Big Brother is watching you.”

Has Orwell’s fictitious vision for the future come to pass with the formation of Homeland Security, or is that just another conversation for those bent on following conspiracy theories?

I must admit that I was taken aback when I learned security officers at Bank of America are employed through Homeland Security. It’s yet another twist that adds fuel to the consuming flame called Occupy the city nearest you. Why would the bank whose very name is, in the minds of many, synonymous to corruption engage in hiring people to work for Bank of America?

The Homeland Security website links jobs available through Bank of America (http://jobs.homelandsecuritynews.info/a/jobs/find-jobs/q-Bank+of+America). More significant to those living in the Raleigh/Durham/Chapel Hill community is the presence of Homeland Security employee’s currently working security at Bank of America local branches. They are stationed across the country and keeping an eye on people in our own backyard. Many are serving in a temporary capacity after being sent to our area from other states.

Homeland Security’s partnership with the nations largest bank has intensified since Bank of America appointed a Homeland Security executive to head the office of business continuity. Donna Bucella, who headed the U.S. Terrorist Screening Center for the FBI, joined the bank in October. Prior to her work with the FBI, she served in the Department of Homeland Security as Director of the Southeast region.

The hiring of Bucella follows a serious threat of exposure from Wiki Leaks. Julian Assange, director of Wiki Leaks, had said that he intended to take down a major American bank and uncover an “ecosystem of corruption” with data coming from an executive’s hard drive.

The New York Times reported on January 2, 2011 that a team of 15 to 20 officials were involved in an internal investigation. On August 29, 2011, Daniel Domscheit-Berg, a break-away member of Wiki Leaks, informed Spiegel Online that he destroyed data he took from the organization, including 5 gigabytes of information from Bank of America-more than 200,000 pages of text.

The battle between Bank of America and Assange intensified in December of last year when the bank said it would join other companies like MasterCard and PayPal in halting payments intended for Wiki Leaks. The banks shares dropped 3 percent the day after Assange’s threat. He never named the bank he would expose; however, in an interview the year before the threat Assange claimed to have the hard drive.

The threat of another security breach may be enough to justify the connection between Bank of America and Homeland Security. The unholy union has led to even more speculation. Part urban legend, part conspiracy theory and part the kind of drama that has one shaking their head (SMH), what is behind this marriage between state and big business?

In April, three Homeland Security Black helicopters dropped soldiers on top of a Bank of America building in Miami. (http://highboldtage.wordpress.com/2011/04/20/homeland-security-black-helicopters-protect-bank-of-america-in-miami/). A police spokesperson says it was a training exercise by the Southeast region of Homeland Security, the same region formerly headed by Bucella, now with Bank of America. Interesting connection.

Then there’s the urban legend dating back to 2006. The rumor circulated that Bank of America and Compass Bank managers had received a memo informing them Homeland Security had access to safe deposit boxes with no need of a warrant. It’s a conspiracy theory that is hard to rebuff because people are highly suspicious that ‘big brother” is watching our every move.

So what is the reason behind this union? Maybe it’s to beef up security after the debacle of 2006. There is evidence that points to Brazilian money launderers moving $3 billion through a Bank of America office in New York. In February, I Watch News reported that there were problems with the banks efforts to develop a computer program that would red-flag questionable movements of money. Boris Galinsky, a former senior vice president, said he was being asked “to develop crap.”

In August 2006, the U.S. Senate Homeland Security Subcommittee on Investigations reported that Bank of America had allowed Samuel and Charles Wyly to avoid IRS scrutiny by allowing the wealthy businessmen to funnel money into the bank through offshore entities. They were charged with a $550 million securities fraud. Maybe security has been placed at banks to monitor potential money laundered to support terrorist activities. I'm just saying.

Or maybe, just maybe, they are placed in our own backyard to keep an eye on illegal immigrants. The National Illegal Immigration Boycott Coalition (NIBC) targeted Bank of America for issuing credit cards, establishing bank accounts and offering loans to illegal immigrants. The boycott began in 2007 after Bank of America introduced the pilot program in Los Angeles as a way of offering service to a rapidly growing population.

Given Homeland Securities role in protecting the boarder, maybe the presence of security officers stationed at local banks is to detect and report those illegal immigrants with accounts. I give up! I can’t figure out the connection between Bank of America and Homeland Security. I do know that it feels like a precursor to Orwell’s community controlled by “big brother.”

Or maybe I’m too much of a pessimist. Maybe I shouldn’t be concerned. Certainly we can trust Bank of America to have our best interest at heart. Surely we have the government on our side.

Or maybe it’s something behind door number 2.
Posted by REV-elution at 1:04 PM