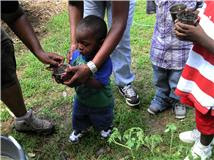 Those labels cost big bucks. Shucks, a trip to Whole Foods will take your whole paycheck. It’s sad that it cost so much just to eat the right way. That’s why Wilkerson and her partner Kifu Faruq have teamed up with Tahz Walker and Christina Rivera Chapman of Tierra Negra for a fundraiser to be held on Friday, September 9th from 5-8pm. They hope to move food justice and food insecurity to the forefront of the food movement in Durham.


“Both of us come from a small black business tradition,” Faruq says when asked about the motivation behind Green Space Initiative, the company she and Wilkerson formed. “There was always someone in our house or in our family with a side hustle. Be it doing hair, doing nails or cooking food that they then turned into a lucrative business.”


Faruq and Wilkerson began thinking about creating their own side hustle in 2009. Faruq was doing clinical research at Duke and Wilkerson did hair at Perfection, a salon owned by her family. They wanted to quit their jobs by finding a way to pay their bills while supporting the community at the same time. The inspiration came when they picked up two magazines-Mother Jones and Yes.

On the cover of both magazines was Will Allen, founder and CEO of Growing Power. Allen, the son of a sharecropper and a former professional basketball player, has worked to transform communities by supporting people from diverse backgrounds and the environments in which they live through the development of community food systems.

“We wondered why couldn’t we do this in North East Central Durham,” Faruq says. “Why couldn’t we help create an alternative food system that is for people of color, run by black and brown folks and our leadership comes from people who are most affected by food insecurity and food scarcity?”

Allen’s work in Milwaukee and Chicago reminded the couple of how their families made the ends meet in the 70s. Wilkerson grew up in Durham on Plum St. Every family living in her neighborhood had a garden.

“They had no idea of what it meant to go without food,” Wilkerson says. “They only brought sugar, coffee, things to clean the house and meat, and sometimes there was someone who still lived out in rural Durham who would slaughter the meat and bring it in.”

Faruq’s mother moved to Durham from California as a vegan. ”She wasn’t going to be able to get tofu, beans, organic rice cornmeal and oatmeal,” Faruq says. “So, she contacted Tree of Life and told them she had to have food delivered to her.” She discovered others with the same needs-Muslims, Jehovah’s Witness, Amish and people from Jewish communities who wanted to maintain their kosher lifestyle-and formed a buying club.

Faruq and Wilkerson formed Green Space Initiative to connect urban Durham communities back to their agricultural roots. So much has changed since life in the 70s in Durham. Processed foods and meat laced with hormones has helped rouse increases in obesity, diabetes and heart disease among African American, Latino and Native Americans. Green Space hopes to create an infrastructure to manage gardens within Durham’s urban community. The fundraiser will help support that effort. The end result is affordable food not laced with pesticides.

Wilkerson and Faruq have come a long way since they saw Allen on the cover of those magazines. Faruq’s Kukia's Cookies is the rave among those in love with her organic, chocolate chip, lavender cookies. Wilkerson has a catering company-Chow Chow- which she describes as Diaspora inspired soul food. “It’s everything from Soul Food to Thai Food,” Faruq says. “It’s food from wherever black folk have been.”

They have called on friends to help support their vision for connecting community gardens. Thomas Justin Robinson, Shirlette Ammons and Shana Tucker will perform at the fundraiser. Tickets are $20. A cadre of local chefs will create a menu using vegetables and herbs from the garden and meat from local farmers. It will take place at the community garden at 2158 Charles St. For tickets call Kifu Faruq at 919-949-4195.

I’m planning to get my vegetables and herbs at Green Space. It’s cheaper than Whole Foods. Besides, it reminds me of my daddy’s garden. I didn’t have to pay two bucks for a pound of tomatoes back in the day. I pulled it from our garden.

They call that old school.
Posted by REV-elution at 9:46 AM