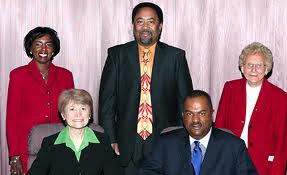 I’m not stunned one bit that Durham’s Board of County Commissioners couldn’t decide on the person to replace Becky Heron. In a previous blog I stated that this group of dysfunctional leaders lacked the guts to appoint Hampton Denllinger. Despite the overwhelming endorsement of the party they all represent, two of the members voted for Wendy Jacobs and the other two voted for Pam Karriker.

Everyone expected Ellen Reckhow and Joe Bowser to stand behind Jacobs. The tie between Reckhow and Jacobs seems to be thicker than the blood normally found among folks in the same family. One is left to speculate about an allegiance that causes a person to vote in opposition of the clear intention of party leadership.

The wild card is Joe Bowser’s strong stance in supporting Jacobs. Unconfirmed rumors have leaked that Jacobs has promised to vote for Bowser as chair if she gets his support. I suppose we will have to wait and see what happens if Jacobs gets the nod. What is clear is the intense conflict between Reckhow and Michael Page. From all accounts, Reckhow is on a mission to unseat Page as chair of the board. Is the rift between Page and Reckhow is disturbing enough for Reckhow to form and allegiance with Bowser to oust Page?

The REV-elution obtained an email sent to Page from Reckhow through her county government email address. The email exposes the inner madness among members of the Board of County Commissioners and can be instructive in understanding why it has been difficult to replace Heron.

“Your anger has continued over the past few weeks. At the board meeting last Monday you turned your chair and your back to Joe and me such that we had to verbally interject ourselves to speak at the meeting (since you would not have seen a raised hand.) I learned from several citizens who watched the meeting on TV that they could not understand why you had your back to us during the meeting,” Reckhow writes.

“It did appear that you were not listening to the question that Joe and I asked since you closed out the discussion by saying that everything we raised had been discussed at the meeting,” she continues. “That was not the case! In fact we raised many new points. Usually, when a lot of questions get asked, an item is deferred to get answers. However, our questions were dismissed-showing a total lack of respect.”

It is significant to note that Reckhow perceives this as an issue with her and Bowser, not her Bowser and Howerton. It gets worse.

“What do you mean by ‘I can assure you that I am not through with your past actions?’ Please don’t threaten me. I could say the same thing to you since there are witnesses to a previous verbal tirade directed at me. I do not deserve to be treated the way you have treated me the past few months,” can you feel the tension.

Then comes the kicker. “Michael-I have been through more than you have concerning Durham County politics; you need to tone down your rhetoric if we are to move forward and serve the citizens of Durham County.”

One thing is clear, things are out of control. Reckhow may be justified for calling Page out for his management style. Who among us hasn’t dealt with a coworker who gets under our skin? As much as I understand dealing with personality conflicts, this goes deeper than he say she say crap. The rift between Reckhow, Page, Bowser and Howerton is seriously impeding county business.

Voters have a right to know if Bowser is pushing for Jacobs due to a promise made. If that is true, and Reckhow is a coconspirator in that maneuver, shouldn’t voters be a tad bit concerned about the implications of having a board with Bowser as the chair? Someone needs to press that question.
Howerton and Page don’t get off the hook. Their action raises serious concerns related to their ability to adhere to the interest of voters. The failure to give credence to the endorsement of Hampton Denllinger says more than the two votes they bring to the party. It says that they lack respect for the group that took time to consider who would best serve the citizens of Durham County.

It’s a dangerous rope to walk. Howerton and Page discounted the process taken altogether by voting for Pam Karriker who didn’t receive one vote from those representing the Democratic Party. What statement is sent to voters after no one on the board considered the intent of the party they represent?

The argument used to support Karriker is missing on many fronts. Howerton and Page were moved by Karriker’s promise not to seek the post during the next election. That argument supports the argument made on the Rev-elution in a previous blog-that board members fear appointing a person with the credentials to unseat them. Some may regard that as a way to dig out from under this pile of dung, but it fails due to the efforts of a notable citizen early in the game.

Many within the community, me being one, pressed the board to consider Chuck Watts to hold the seat for the remainder of the term. The hope was to convince Watts to take the seat with the caveat not to run during the next election. It’s the same offer made by Karriker. The difference is that Watts refused to place his name in the hat due to the Democratic endorsement process. It was a game that he didn’t want to play. Can’t say I blame him for that.

I respect Watts for standing by his principals and for refusing to get into the frail due to his support of Denllinger. Watts, like those within the Democratic Party, saw Denllinger as a good fit. Who in their right mind would discount the endorsement of the party? The answer is simple. Those who care little about what the masses think.

A number of questions need to be raised by voters. The good news is an election is coming soon. From where I stand today, we need to get rid of all of them.
Posted by REV-elution at 11:39 AM