Hey Hayti. Thanks for the memories! 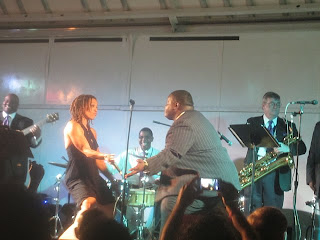 Liz Jackson and Tamisha Waden swayed on the stage as they belted the lyrics to my favorite old school funk anthem. “Flashlight,” it was like old times on the dance floor as my girlfriend Connie and I did what we do best. We moved and grooved until we couldn’t take it no more.

It didn’t matter to either of us that people were watching. We have an understanding. We’re both ministers. We both have a respect for those old sacred hymns, but when John Brown and the Groove Shop Band fired up my all time favorite-Parliaments “Flashlight”-it would have been disrespectful not to “tear the roof off the sucker”.

Besides, we were there to celebrate all that makes Durham special. “Everyone who doesn’t like Durham can kiss my ass,” a vivacious Jackson declared. “There’s not a place like Durham anywhere.” So true. The thrill of the moment reminded me of the shout after one of my feel good sermons. It was part revival, part reunion and whole bunch of sure you rights.

I must say I was taken by surprise. All of this happened at this year’s Bull City Blues Festival. It’s not that the festival is impervious to the gratification of a good time. This was year 24 of the festival, and, from all accounts, a good time has been had since year one. What made this one different were the circumstances behind it all. There were no big name national acts. There were no ticket sold and it was held at a new site. Despite all those changes, this year’s festival far exceeded the expectations of everyone.

“My son in law is going this year because it is free,” Naomi Quinn, my friend, and Saturday Morning Breakfast Club member, informed me earlier that day. It is true that the attendance at past festivals has been hindered by the steep price attached to getting in. During these tough economic times it is difficult for a person to afford to make that sacrifice. No, forgive me, it’s hard to make that sacrifice even during good economic times.

I couldn’t count the people present. “There must be 10,000 people here,” Connie said as we approached the line at the Joe Diners food truck. Connie and her daughter Deja wanted one of those famous hotdogs. It took us 45 minutes to get to the front of the line. I enjoyed the wait as Bobbie Hinton pumped the crowd up with his blend of blues, soul and funk. I did a two step as my friend Aaron Mills, the bass man for the group Cameo, plucked until we all smelled the funk.

There was only one problem with the night. I had to leave earlier than I wanted. I missed hearing my friend Shana Tucker’s performance. I always giggle when I watch her play that cello while startling folks with her captivating voice. Her gift is the perfect marriage of all things classical and things found in the back room of a liquor house. I also missed Mel Melton and the Wicked Mojo’s. I’ve never heard the group, but I’ve eaten enough crawfish at Papa Mojo’s Roadhouse to make up for my omission. Mel is the owner of the restaurant.

I’m not sure of what we can expect on next year. I know the festival is Hayti’s big fundraiser. They need the money to continue all that great work they do at the center. It’s too bad we can’t expect the same on next year. They have to make that money, and a free concert isn’t a workable business model.

Hmm, I wonder what would happen if everyone present that night decided to give a $100 contribution? I’m not sure if it would be enough to justify another free concert, but it would go a long way toward us saying thanks for the memory.