Black Pastor's Stand to Ban Gay-Marriage: What Up With That? 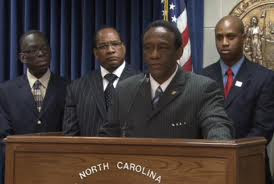 Now I’m being told I’m not a Christian. I’ve been called a heretic and a disgrace. Shucks, I’ve been called things that I can’t print on this page. I can deal with being ostracized by the good ole boys and girls club of the Christian elite, but questioning the faith I love so much is stepping on butt whip territory.

Things got crazy when Rep. Marcus Brandon (D-Guillford) brought attention to a recent poll from Elon University that shows 61% of African American living in North Carolina oppose or strongly oppose an amendment that would ban same-sex marriage. Fozard repeatedly called Brandon a “liar.”

Fozard’s comments follow a pro-amendment press conference on August 30, held by Rep Paul “Skip” Stam (R-Wake) during which Stam compared same-gender relationships to polygamy, pedophilia and incest. Conservatives are hoping that this issue will forge a relationship with African American voters that will severe the tight grip between African Americans and Democrats.

The strategy is a simple one. There is only one thing that goes deeper than black folk’s allegiance to the Democratic Party, and that is their faith. The religious conservatism of African Americans has long been divergent from the progressive political agenda of those who attend those churches. The rise of the mega-church movement can be, in part, linked to a union between a conservative evangelical political agenda and the charismatic worship experience of the African American faith tradition.

Fozard’s comments should surprise no one. His conservative theological agenda is instructive in gauging the radical departure the Black Church has taken in leading the charge in constructing a progressive theological agenda. One need only consider an article that appeared in the Independent Weekly on March 3, 2004.

"Faggots across the nation, heading churches. Homos on the pianos. Faggots in the choir. What kind of spirit is leading that church?" The Independent Weekly quoted him as he preached to 150 people after watching “The Passion”. “And now? Men with men, women with women? Let me remind you of Sodom and Gomorrah, That sin will bring fire from heaven. I tell the homosexual man: repent, turn and get a woman. I tell the woman who wants to get married: get yourself a man."

He then defines the difference between a true believer and those who play games with God. "The Reverend Al Sharpton says it doesn't matter who you sleep with?" he says. "I'll tell you one thing: the Reverend ain't no Reverend. All of them are running around saying it doesn't matter who you sleep with! They want that little 1 percent of faggots that go to vote."

Could this be our generation’s version of the Reconquist and the Crusades? The war of words hurled by African American evangelical Christians is one that forces a definition related to what it means to be a Christian. It is one thing to discuss and ponder the significance of these matters politically, but it is quite another when a person is questioned due to the position they take. One can be a Republican or Democrat and a Christian at the same time. But, according to Fozard and his cohorts, you can’t be a Christian if you support gay-marriage.

It’s troubling when people have an obsession with forcing others to think the way they do. The last I checked that’s why we have a Constitution in this country. It has something to do with protecting the rights, liberty and pursuit of happiness of all who call America home. I suppose, for some, those who decide to love a person of the same sex aren’t people. They shouldn’t be given rights because they forfeit being created in the image of God due to a decision they make. That’s what some Christians will tell you.

The last I checked, the Constitution is about protecting rights, not taking them away. It’s about shielding those who are different. Not all of us are Christians. Many cling to no faith claim. Does that make them less American, or, as Fozard would have you think, less of a person. I think not. America is a nation of free expression. We have the right to follow happiness in the way that speaks to our unique personalities.

Sorry Mr. Fozard. I am a heterosexual black man. I was born in Missouri. I am an American. I support the rights of those who love a person of the same gender. I believe in their right to get married if they desire living within a committed relationship that will be sanctioned legally. I will stand with them in that struggle. I do so not because I am gay, but because I am a Christian.

Would he call them faggots, or give them a hug and call them brothers and sisters? I’ll take the hug.
Posted by REV-elution at 1:47 PM