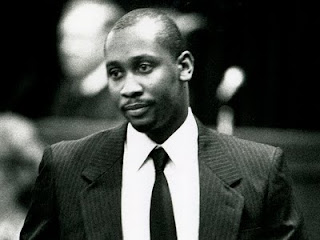 After praying most of the day, the state of Georgia took the life of Troy Davis. The last minute efforts of his attorneys to stay the execution failed when the U.S. Supreme Court denied their plea. At 11:08 p.m. Davis was murdered by lethal injection.

No, I didn’t use the wrong term to describe what happened. I’m convinced, beyond all doubt, that Davis was murdered last night. It was hate that secured his fate. Davis, like so many other men and women caught in an unjust system, was murdered to protect the reputation of today’s version of the plantation.

It wasn’t enough that seven witnesses recanted their testimony. It wasn’t enough that there is a possible confession of another suspect. There were too many doubts to take a life. The legal system established to protect the innocent from the bias of jurors has failed once again. Over and over again, we have observed that costly crack within the system. People lie. People are willing to do whatever it takes to win a case. They hide evidence. They determine guilt based on the way a person looks, and they refuse to see past their stereotypes and hatred.

In cases like this, prosecutors tend to place the desire of the victim's family above discovering the truth. The weeping family deserves closure. They simply want the pain to go away. Taking pain away equates to killing the person who killed the one they love. Once the courts zero in on a suspect; hatred takes center stage.

Hatred discounts the humanity of the person accused. Someone has to pay for that evil act that robbed the family of the life they miss so much. Hatred has a way of hiding truth. It seeks the image of what they hate to hate even more. Hatred can’t hear the screech of reasonable doubt. Hatred has no doubt. It hates beyond proof. It functions with its own set of rules.

It is easy for hate to murder what it hates. Hatred feeds on the conditions of bigotry and assumptions. “This is what black men do,” hatred yells in the face of evidence. “He looks like a person who could have done this. He must be guilty.”

A system fueled by hate is managed by those willing to circumvent the suppositions of the system they represent. The Supreme Court embraced the law of hate above the mandate of innocence beyond reasonable doubt. The hate of the family meant more. The consuming hatred of black men numbed the power brokers from hearing beyond that hate.

"I'd like to address the MacPhail family," Davis said, according to The Associated Press, before taking that last breath. "Let you know, despite the situation you are in, I'm not the one who personally killed your son, your father, your brother. I am innocent.”

"The incident that happened that night is not my fault," he added. "I did not have a gun. All I can ask ... is that you look deeper into this case so that you really can finally see the truth.

"I ask my family and friends to continue to fight this fight," he said. "For those about to take my life, God have mercy on your souls. And may God bless your souls."

Hate didn’t hear what he said. "Justice has been served for Officer Mark MacPhail and his family," state Attorney General Sam Olens said in a statement.

He calls it justice. I call it murder. Another black man has been killed despite evidence that could prove his innocence. The protection of his rights doesn’t matter in a system soured by the site of black skinned dudes.

There is no reasonable doubt for black men. There is only hatred.
Posted by REV-elution at 11:08 AM