Why I'm not praying for Donald Trump 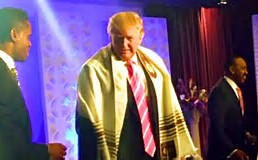 I will not be praying for Donald Trump.


It’s my answer to a question that keeps popping up in my Facebook newsfeed. I’ve read numerous postings arousing people of faith to pray for Trump as a sign of unity, understanding and peace. It all sounds reasonable given how scriptures are manipulated to endorse compromise in times of discord. Who else, if not the Church, will challenge people to end the mudslinging.


So, I will be praying, but not in the way many expect.


Don’t expect a series of sermons regarding the need to move beyond race, gender and a myriad of other groupings used to pit people against one another. Don’t expect the endorsement of an ethic that promotes forgiveness, the turning of the cheek, and checking personal feelings at the door, to engage in a meaningful mountaintop experience.


It’s not that I don’t believe in prayer. I will be praying. In fact, I’m praying more than ever before. So, it’s not an invalidation of the purpose and capacity of prayer, but a question of the focus of my prayers. I will not pray in a way that negotiates the Great Commission to teach and baptize people in a truth that radically changes the world.


I will not pray in a way that panders apathy and relinquish the role of the Church as a mediator of revolution. I will not participate in the type of slapdash engagement that measures faith by partaking in the American dream. I refuse to relegate faith by an unquestioned patriotism symbolized by waved flags and denunciations of those who protest the movement toward a xenophobic agenda.


Why is this important?


Because when the Church prays in a certain way, it is being used to promote an agenda that compromises the work of the Church. The Church becomes slothful and daft with teaching that sponsors the positions of the rich, the privileged and the powerful. The Church prays on behalf of the individuals and institutions that oppress and belittle the weak, rather than teaching a message that demands repentance.


Yes, the Church prays for the minds of the powerful to be changed, not for the dominant to facilitate a process that increases the burden. The Church is commissioned to defy all spirits and systems that limit the advancement of our neighbors. The Church is called to function as the Spirit of the resurrected Christ in ways that evoke the will of a loving God. The Church is challenged with the enduring obligation of reminding institutional leaders to undo the systemic evils that hinder human progress.


Thus, I will not pray for unity and peace that forces compromise related to God’s vision for the world. I will not bid people to pray and get over it, to work harder without confronting revolting systems or to hold hands, sing songs and pretend evil hasn’t been legislated by political and religious leaders.


“First of all, then, I urge that supplications, prayers, intercessions, and thanksgivings be made for all men, for kings and all who are in high positions, that we may lead a quiet and peaceable life, godly and respectful in every way,” Paul writes in 1 Timothy 2:1-4. “This is good and it is acceptable in the sight of God our Savior who desires all men to be saved and to come to a knowledge of the truth.”


I’m aware of both the context and culture that frames Paul’s plea for prayer. He’s writing to a community vexed by an oppressive government. I’m aware of the challenges Paul faced due to being jailed for proclaiming a message not endorsed as a legitimate religion. Paul’s appeal for prayer is offered from a unique perspective. He requests prayer for leaders responsible for his imprisonment.


When placed within the context of his writing, these words attributed to Paul, offer a reason for his request. This is not an appeal to pray over the handling of public education, national security or immigration. Paul is requesting prayer that evokes a change of mind. Given the lack of support for his message, the author sought prayers that would correct the way leaders perceived his ministry.


The prayers of the Church weren’t passive acts. The work of the Church coincided with prayer. It didn’t relegate the power of prayer to lofty words during the Sunday morning ritual. Paul, and the other men and women who promoted the teachings of Christ, did more than pray for leaders. They worked to change the minds of leaders by presenting an alternative view on how people can coexist.


They continued to expose hypocrisies within their own religious system and the governments that subjugated poor people, women and sick people. In encouraging a new way of thinking about what makes a community, prayers were needed to change the way people thought about what that means.


This means I will not be substituting prayer for protest. Don’t expect the type of discourse that validates the spirituality of Christians who spew hate towards members of the LGBTQIA community, attacks women’s reproductive rights, have a limited understanding of what it means to be the beloved community or fails to move beyond a fundamental approach of scripture to assist in conversations that undo the tension between the Bible and science.


Jesus came to us to expose hypocrisy. The Church that prays for leaders, devoid of indisputable critique of the systemic evils hindering human progress, is used to advance immoral activity.


The book of James says “faith without works is dead”. To that I add, prayer without activism leads to those dry bones in the valley.


Prophet, preach to the bones.
Posted by REV-elution at 11:09 AM