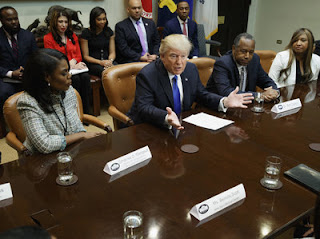 What should black Americans expect from President Trump on the first day of African American History Month?

Maybe a mention of Serena Williams for winning the Australia Open. Williams now stands alone as the all-time leader of Grand Slam titles in the modern era with 23 wins.
Maybe a mention of President Barrack Obama who just left office as America’s first black president.

It was an opportunity for Trump to mend fences caused by his birtherism campaign. Speaking of fences, Trump could have mentioned August Wilson and the performances of Viola Davis and Denzel Washington in the movie adapted from Wilson’s play. He could have talked about “Hidden Figures”, the movie that unpacks the contributions of black women working for NASA.

True to form, Trump used today’s meeting at the White House to celebrate Black History Month to emphasize his grudge with the press.

"I don't like watching fake news," Trump told guests at the listening session.

Given the emphasis on the press, Trump could have transitioned into a discussion involving the work of George Curry, the former editor of the Detroit Free Press and Emerge Magazine, and Gwen Ifill, a veteran television journalist who served as moderator and managing editor of the Public Broadcasting Service's talk show "Washington Week”. Both died in 2016.

You would expect a discussion involving the contributions made by black journalist since the publication of Freedom's Journal, the first African American owned and operated newspaper in the United States. The newspaper was founded by John Russwurm and Samuel Cornish on March 16, 1827 in New York City.

Rather than take the high road, Trump used the opportunity to attack CNN and other news outlets while celebrating the efforts of Fox News.

"Fox has treated me very nice. Wherever Fox is, thank you," Trump said.

It’s disappointing that Trump’s fight with the press took precedence over Black History.

"Frederick Douglass is an example of somebody who has done an amazing job and is being recognized more and more, I notice," Trump said.

Is that the best he can do?

It sounded like a lecture from a Black History Month program during an assembly at an elementary school. As bad as the mention of Douglass played in displaying a lack of sensitivity and refined understanding of Black History, Trump quickly launched into another confrontation regarding an erroneous report that a bust of Martin Luther King. Jr. had been removed from the Oval Office.

"It turned out that that was fake news," Trump said. "But that's the way the press is ... Very unfortunate."

Trump failed to mention that the claim of the bust being removed was never a news story. It was limited to a press pool report tweeted out in social media, but corrected within minutes of its release. It was a regretful mistake that deserves censure, but what does it have to do with Black History Month?

Americans should expect more from Trump than a few comments about Douglass, King, Rosa Parks and Harriet Tubman mingled with criticisms against the press for spreading his version of “fake news”.

"During this month, we honor the tremendous history of the African Americans throughout our country, throughout the world if you really think about it, right?" Trump said when discussing the life of Douglass. "And this story's one of unimaginable sacrifice, hard work and faith in America."

What’s the point in offering a tribute while attacking the press?

The discussion was not an observance of the contributions of blacks throughout history as much as a strike at black leadership. Trump continued his threat to “send in the feds” if Chicago isn’t cleaned up.

"We're going to have to do something about Chicago," Trump said.

What does that have to do with Black History Month?

The mention of Chicago was prompted by a comment from Darrell Scott.  The Cleveland pastor, who serves on Trump’s transition team, said he’s been contacted by "some of the top gang thugs in Chicago for a sit-down."

What does that have to do with Black History Month?

Absolutely nothing, unless you assume the only relevant issues involving black history happened during slavery or the Civil Rights era. It would help if Omarosa, Trump’s advisor in handling black folks, read a few more books and took classes on critical race theory.

So, Oma-Rosa, check this out. Tell Trump to stay on course when he talks about black people. Don’t mix his beef with the press while reflecting on the contributions of black people in America. It feels like black people are no more than a side chat in your personal agenda to minimize the role of the media.

Point two, surround yourself with some credible black leaders. It’s a dishonor to the achievement and legacy of Dr. King, Gardner C. Taylor, Samuel D. Proctor, J. Alfred Smith, Jeremiah Wright, Vashti McKenzie, Prathia Hall, Renita Weems and Carolyn Knight – men and women who minister from a place of deep theological reflection rooted within the context and culture of the enduring witness of black people in America. Scott lacks the insight and intellect to represent black folks outside his promotion of a prosperity driven theology.

Put some respect on our name. In other words, put on your big boy underwear and talk like you know more than you learned in the second grade.

Trump’s Black History tribute is an offensive display of the type of rhetoric that seeks to minimize the message and focus of black liberation. It brutalized the press for reporting the disdain that fuels protest. In blaming the press and offering a crude statement, Trump once again proves he doesn’t get it.

Sadly, no one is surprised.
Posted by REV-elution at 4:38 PM