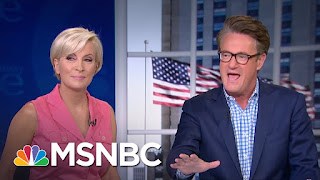 There was an interesting conversation today on the MSNB’s ‘Morning Joe”.  Joe Scarborough, host of the popular show, was furious in explaining his angst as a former conservative college student on a Southern campus.

He explained how liberal professors and students shape the world view of students like Stephen Miller, now the senior advisor to President Donald Trump. Scarborough argues students who begin their college experience right of center embrace more radical brands of conservatism due to the attacks they face.
Listen to Joe Scarborough rant on "Morning Joe"


Scarborough’s diatribe compelled me to consider my actions as a college professor. I reflected on my lecture on being impartial in reporting on subjects that strain your political position. I challenged students to use their bias to force balance. I told them to press beyond their prejudices to consider the other position.

It was a Summer session, and the students were witnessing both the Republican and Democratic debates. A few students admitted allegiance to Donald Trump. I noticed the apprehension coming from their peers.

Scarborough is correct in his assessment of what often takes place on campuses. I noticed nonverbal movements that made Trump supporters feel uneasy.

“How can you be effective as journalist if you can’t take time to understand how your peers came to this conclusion,” I asked. “The story isn’t as much about their decision. It’s more about how and why they made their decision. Your job is to get that story.”

It helped that I had served a church with numerous Trump supporters. I had to come to grips with serving a congregation with views radically different from my own. As a minister rooted in the black faith tradition, my understanding of ministry was different than the people I served. It was that difference that troubled my soul.

Yet, I loved the people I served. I also loved my students.

Which brings me back to Scarborough’s position. Is he correct in blaming liberals for the radical conservatism of people like Stephen Miller. Was it the Liberal professors and students at Duke University who motivated Miller to formulate opinions that were a reaction to their attacks?

I’m reluctant to impute liberals for Miller’s alt-right sentiments. If so, I could charge black nationalist views to white conservatives. If espousing extreme opinions is a corollary of being rejected by those on the other side, there is reason to expect even greater opposition among people representing the extreme left.

The failure of Scarborough’s assessment is in how it disregards the role privilege plays in articulating conservative conclusions. Miller, and people like him, impute positions aimed at maintaining the status quo. They are rooted in class, racial, gender and heterosexual privilege in ways that assume the continued role of the dominant culture.

Scarborough’s rant reminded me of the frustration I carried after reading “Bell Curve: Intelligence and Class Structure in American”, the controversial book written by Richard J. Hernstein and Charles Murray (1994). The book left me enraged by the assumptions of its authors.

Hernstein and Murray argued that intelligence is inherited, and that blacks are poor because they are not as smart as whites. It is true there was more to the book, but the conclusion formulated in the third and fourth chapters made it difficult to concede the significance of the remaining chapters.
The book reminded me of the long history of using science to justify racism. It took me back to Darwin's “The Origin of Species by Means of Natural Selection, or the Preservation of Favoured Races in the Struggle for Life”. Darwin is among the scientist credited with creating “scientific racism”.

Darwin applied evolutionary ideas of natural selection not only in constructing views of animal development, but also to the development of human races. He reflected on natural selection in regard to the killing of indigenous people in Australia by the British. He wrote of blacks as “savage races” in a category comparable to gorillas. He advocated against social programs for the poor and weak because they permitted the least desirable people to survive.

‘The Bell Curve” was a distressing reminder of how science has been used to defend racial privilege based on notions of genetic advantages. A further examination of conservatism reveals the defiance people have with many of its assumptions. Scarborough seeks to separate radical conservatism from his brand of political thought, but both are rooted in suppositions that embrace privilege as a construction of natural selection.

Millers conservatism is built on a biologically invalid conception of race. It is built on a foundation that embraces the notion of a cognitive elite. It builds a public policy agenda that assumes genetic superiority. It embraces views of natural selection that allows space for the weak to perish while the strong prosper due to their selection as the more powerful race.

My appraisal of my angst with conservatism results in a conclusion that intensifies my position. My issue isn’t the politics of conservatism. It’s the suppositions that ground its notions. It’s the range of condescension woven throughout its public policies that intensifies my disdain. It’s a long history of research used to support superiority that irks my awareness.

Scarborough’s tirade defied my liberal positions. Could it be that liberals, like me, are responsible in creating alt-right conservatives? Would it be better if liberals took more time to listen and modify their position? Have liberals, like me, been seduced into embracing a narrowly defined position, and, if so, is the truth found somewhere in the middle?

There may be an element of truth in those questions, but how can you fathom listening when doing so involves embracing genetic inferiority?

How do you endorse a conservative agenda that negates the construction of institutions that empowers a set population at the expense of others? How do you invalidate the challenges of institutionalized racism and consequences of generations of sexism?

Scarborough may have a point, but it’s one framed from a place of privilege. People like Miller are angry because their privilege is being questioned. Moving further to the right is not the fault of liberals, it’s the result of his unwillingness to concede his privilege.