Black on black violence is the lesson from Malcolm X's death 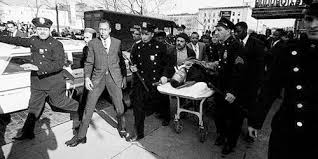 On yesterday, 52 years ago, members of the Nation of Islam killed Malcolm X.

Who killed Malcolm isn’t a matter of debate. Leaders of the Nation of Islam haven't been charged with his murder. Some argue the FBI conspired to murder Malcolm.

What matters is how Malcolm's death impacts conversations related to reducing black on black violence. How effective can the Nation of Islam be in leading efforts to convince black people to stop killing one another when their leader has justified the death of Malcolm X

During his 1993 Savior Day message, Louis Farrakhan, leader of the Nation of Islam, called Malcolm X a traitor and defended the right of a nation to kill a traitor.
Louis Farrakhan discusses the death of Malcolm X

It’s a despicable part of black history. Three black men killed Malcolm. Talmadge Hayer, Norman 3X Butler and Thomas 15X Johnson were convicted of murder in 1966 and sentenced to life in prison. All three were members of the Nation of Islam. Prior to his death, Malcolm told Gordon Parks that the Nation of Islam was trying to kill him.

Farrakhan said a nation has the right to be governed by their own laws. He said it’s no one’s business how a nation deals with a traitor. Malcolm was nurtured by the teachings of the Nation of Islam and it’s the right of the nation to punish those who violate their trust.

It’s a lesson that resonates among some black men trapped in the web of street justice. Some die due to the consequences of betrayal. Some are punished for violating a set of rules established within a culture not troubled by the laws of the broader society. They are bond to lessons about solidarity to their own cause. They are taught lessons about manhood that establishes relationships of trust.

Farrakhan said it’s no one’s business. The Nation of Islam has the right, no, in his mind, the obligation, to kill anyone who decides to promote a different message. This is the mindset of groups like the “Bloods” and “Crips”. The death of Malcolm X helps frame discussions involving street justice and the increase of black on black violence.

Members of the Nation of Islam killed Malcolm.

It was his third death. Each death came with a change in his name.

Malcolm Little was the name on his birth certificate. A part of his past died when he took the last name X. The X denoted the unknown. Little was the name of his ancestor’s slave owners. It implied a relationship with the people who forced faith in the blue-eyed Jesus.

The X was replaced by El-Hajj Malik el-Shabazz after his pilgrimage to Mecca. His Hajj was delayed in Jeddah when his U.S. citizenship and inability to speak Arabic raised questions related to his status as a Muslim. He was given Abdul Rahman Hassan Azzan’s book “The Eternal Message of Muhammad” with his visa approval.

He became a Sunni Muslim and returned to America with a different message.

“I believe in human beings, and that all human beings should be respected as such, regardless of their color,”  El-Hajj Malik el-Shabazz said during a forum at Harvard Law School on December 16, 1964.
It was a second death.

He was preparing to address the Organization of Afro-American Unity. More than 400 people were gathered at Manhattan’s Audubon Ballroom to hear him speak regarding his effort to speak before the United Nations about human rights violations.

"Nigger! Get your hand outta my pocket,” a man yelled.

As his bodyguards attempted to subdue the disturbance, a man rushed forward and shot Shabbaz multiple times with a sawed-off shotgun as two other men fired semi-automatic handguns. The autopsy located 21 gunshot wounds to the chest, shoulder and legs.

The third death was community trust. He belonged to all of us. His words inspired the type of change that challenged movement toward a better way. Three brothers killed his dream. Three brothers taught a lesson we can’t forget.

This is the burden of black on black violence.


It started with Malcolm’s death.
Posted by REV-elution at 10:14 AM