Trump's "fake news" exposed for being the truth 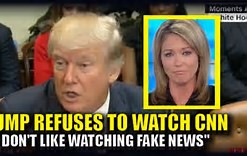 
Really. I mean it with all my heart. I know, it’s Valentine’s Day and love is in the air, but my reasoning behind thanking 45 goes beyond my desire for pieces of chocolate, a fine meal and a bottle of bubbly to set the mood.


All of that is true. My mama raised me to be a romantic, but there is nothing about Orange Julius to trigger warm fuzzy feelings. Put another way, there’s little love in my statement and God’s grace and mercy have nothing to do with my position.


I’m thanking the Orange faced liar for helping people understand the significance of the press. Trump’s feud with the press may be the thing that will boosts confidence in the men and women dedicated to telling the truth.


Prior to this past election, the press was impugned with being responsible for everything wrong with America. No one trusted the media. In fact, the media became synonymous with fiction writers, public relations agents and creatures from outer space. Whenever questions arose related to what aisles America, the media became the predetermined response.


The phrase “the media” has become fixated as America’s villain replacing Lex Luthor, Darth Vador, Hannibal Lector and the Joker as the evil behind the destruction of our dreams. “The media” did it. All of it.


“The media” is controlled by the same stuff that smashed America’s political process. Love for money skillfully manipulated the truth, the whole truth and nothing but the truth. Some gluttonous corporate mogul pulls the strings of journalist who wobble from one story to the next like puppets devoid of the backbone to say “Hell no”.


That’s the newest spin regarding the disunited state of America. Be it Democrats on the most progressive end of the political spectrum or Republicans on the alt-right, the press did it – all of it.


The press should have reported more on the rise of Bernie Sanders and the avarice that silenced their pens. The media should have talked about the old school political structure that undermined the voices of young people sick of business as usual. The media should have exposed Clinton’s corruption while spending less time promoting Trump’s agenda.


You heard it all.


The media is a bunch of liberal-minded hippies out to destroy America with their socialist agenda. There’s a list for that – the gay agenda, the black agenda, the weed smoking agenda, the agenda to destroy white people – it’s a long list.


All of that ‘fake news is fired by the liberal media. Don’t listen to their version of the news. In fact, there’s alterative news that doesn’t get boggled with insignificant issues like facts. The media wants to pitch facts, but who needs facts?


But, glory be to God and Donald Trump!


This is what happens when the media fails to do their job. If the media stops digging and asking and following up at the end of the press conference, the lies become normative. If the press accepts being censured for refusing to accept the alternative version of the news, America becomes a dictatorship devoid of adequate challenges when the Constitution is thrown out the window.


Trump called reports regarding National Security Advisor Mike Flynn’s contact with Russia “fake news”. Trump placed CNN in a corner, like a second-grader wearing a dunce hat, for doing their job. Americans were told that’s what the press does. Reporters are biased. They never tell the truth.


Thanks to Trump, Americans are being reminded of the role of the press. In a story, reminiscent of the Watergate scandal of 1972, the media is challenged to expose the truth. The Trump administration won’t like it, and many Americans will dispute what’s written.


But this is how we roll. This is what we do, and despite the criticism we have faced, you should thank the media for protecting America’s freedoms.


Mr. Trump, call it fake news if you wish, but the truth will set us free.