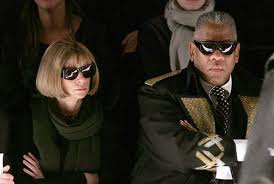 “That’s André Leon Tally,” I screamed as I yanked the wheel to the left to avoid crashing into the car in the right lane.
“Who’s that,” the duet n the car responded in a way that implied so what.
It hurt me that no one knew his name.  It hurt even more when I discovered Tally is a Durham native. He graduated from North Carolina Central University before heading to Brown University where he received a Master’s degree in French.
Before writing more about Tally’s work, I have to ask.  Do you know him?  I’m willing to bet you don’t.
Tally moved to New York to become Andy Warhol’s assistant before becoming the most influential person in the fashion industry.  He’s editor-at-large for Vogue Magazine and gets front row seating at top fashion shows in New York, Paris, London and Milan. Tally made a cameo appearance in the 2008 movie Sex & the City and advised Michelle Obama on fashion before connecting her with Jason Wu.
Many claim the character Meryl Steep portrayed in the movie The Devil Wears Prada is loosely based on Tally.  In fashion, he is larger than life.  In Durham, he’s just a black dude walking around “the wall’.
Maybe it’s Durham’s small town ways that draws Tally back home from time to time to take those brisk walks around “the wall”.  As tempted as I am to run up to him and make a formal introduction, I don’t want to be perceived as a groupie.  Yes, I’m a recovering label whore.  I would love nothing more than to have a suit tailored by Ozwald Boatang.  Those who have read Backslide, my second novel, know my spiritual battle with all things high class juxtaposed against my fight for the poor.
To say that Tally is the king of fashion is an understatement.  He is “the man”, and Durham is his home.  I never hear mention of his contribution to fashion during that 28-day period set aside to celebrate black history.  There should be a street named after him in Durham.  Maybe then people will get to know his name.
Come to think about it, that’s how we treat the people who have made noteworthy contributions in their field.  Yes, we are quick to make mention of those who helped build Durham’s Black Wall Street.  We have buildings named after them to help us remember how they paved the way.  What about the vast others who were born in Durham or made Durham their home?  Shouldn’t we find a way to say look at what came from the place we call home?
I propose we start renaming streets in Durham.  Certainly there are enough that deserve a name change.  I have a long list: John Hope Franklin Blvd., Pauli Murray St., Shirley Caesar Rd., Zora Neal Hurston Parkway, John Lucas Freeway, Ernie Barnes Circle, Leroy Walker Rd and Nnenna Freelon St.  There are others on my list.  The contributions are vast, so don’t get mad at me if I left someone off the list.
Shouldn’t our street names reflect more than the contributions made by a few dudes named Duke, Mr. Watts, Mangum and our close proximity to Chapel Hill? A drive around the city leaves one hard pressed to find places that celebrate those who grew up within walking distance from those tobacco warehouses.
Thus begins my official campaign to rename streets in Durham.  I’m calling on the city council to pick a few streets and get the show on the road, or should I say road signs? Think about it.  How inspiring would it be to have streets named after the black men and women who make us proud to live in Durham?  What would it mean to honor a few of those living legends – Lucas, Caesar and Freelon – by giving them their roses while they are still with us?
Yeah, that’s André Leon Tally walking around “the wall”.  You may not know what he looks like, but it would be nice if people knew his name.
Turn left on André Leon Tally Rd. It’s the street after you pass the Hayti Heritage Center. Then turn right on Ernie Barnes Circle.
Posted by REV-elution at 1:50 PM