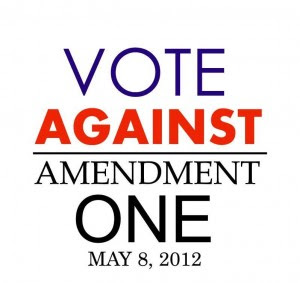 I consider it the most important item on the election ballot. It defines how we define what it means to be a community. It establishes how we decide to function as people dedicated to the protection of one’s right to define their own space as members of the human family. It’s more important than our vote for County Commissioners. Amendment One has implications beyond a few terms in office.

I’m maddened that we’re forced to vote against the move to place an amendment in the North Carolina constitution that defines marriage as a bond between a man and a woman. Voting yes is an unequivocal no to those who desire the freedom to express their love in a relationship with a person of the same gender. This battle is, for those who support the amendment, paramount to a holy war. They perceive it as an attack on God’s will, and contend that affirming same gender bonds pits the nation in conflict with divine order.

What makes this vote so critical is how it forces voters to validate a theological agenda that compromises the divide between church and state. If Amendment One passes North Carolina will go on record as a state that endorses a theological agenda that is rooted within fundamentalist interpretation. Formulating a state mandate that is structured on a Christian Biblicist dogma will radically shift how we envision what it means to be a community that embraces different faith claims and supports the rights of those with views different from our own.

Given the importance of Amendment One, it is vital that voters consider each candidates position on the amendment prior to casting a vote. Many have dodged the issue by hiding under the rhetoric of “that’s not the business of the Board of County Commissioners. We should leave it up to the voters to decide.” In answering questions related to their stance on Amendment One, candidates express their vision for community, and reflect the courage to rise to the occasion when faced with potential opposition.

The candidate that avoids this issue isn’t worthy of consideration. They refuse to say yes in support due to how that would alienate those who oppose the amendment. They refuse to say no out of fear that they would evoke the scorn of conservative minded Christians waiting to cast folks in Hell for going against the Word of God. By staying in the middle, I’m forced to speculate on the consequences of voting for a weak politician incapable to telling us the truth about how they feel.

It reminds me of a conversation I had with my father in 1972. He told me he was supporting George Wallace for President over Jimmy Carter. Wallace, who was elected Governor of Alabama in 1962, stood in front of Foster Auditorium at the University of Alabama in an attempt to halt the enrollment of black students. Wallace used a quote from Hebrews 13:8: “Jesus Christ the same yesterday, today, forever,” as the basis for a line in a speech. “In the name of the greatest people that have ever trod this earth, I draw the line in the dust and toss the gauntlet before the feet of tyranny, and I say segregation now, segregation tomorrow, segregation forever.” ”

I didn’t understand why my father would vote for a man like Wallace. I’ll never forget the look when he said, “They’re all a bunch of liars. They tell you one thing and do the opposite. I’ll rather vote for a man who tells me the truth in my face, than a man who lies and does the opposite of what he claims.”

I could sense his rage. I learned a lesson that day. My father then, and me now, have endured massive deception from those who hold political office. That’s why this vote is important to me. It’s also why it’s important that I know, up front, how the people who desire my vote feel about Amendment One. You simply can’t hide behind the line that says it’s not within your jurisdiction. It is because we deserve to know your theory behind what it means to be a community.

So, come clean on your position. If you can’t do that, you will not get my vote. I’m begging others to take the same position.

Yes, it’s important that we know each candidates position on those questions. The same applies on how a person feels about the rights of those who love a person of the same gender. You may not agree, but should our constitution force the issue beyond our opinion? I think not!

Have the guts to tell us how you feel, and leave it up to the voters to determine if you are worthy to serve based on how you answer that question.
Posted by REV-elution at 11:56 AM