The African Diaspora Film Festival addresses the state of hip-hop. 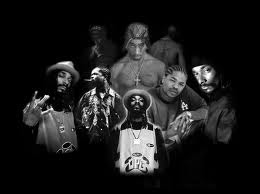 Does the resurrection of Tupac pave the way for the rebirth of Hip-Hop? The appearance of Tupac, via a hologram, at the 2012 Coachella Valley Music and Arts Festival was the talk of the week.

Performances by Snoop Dogg, Dr. Dre, 50 Cent, Eminem, Wiz Khalifa, Rihanna and Usher weren’t enough to overshadow the performance of the legendary rapper. The hoopla involving the return of the hip-hop messiah has led to speculation that Tupac may take the hologram on the road.

Imagine listening to him spit the lyrics to “Life Goes on”.

Makes you wonder if he knew his death was coming.

It also leads to intense discussion involving the state of hip-hop since the deaths of Tupac and Notorious B.I.G. What has happened to the genre that introduced the world to street pain and pleas for folks to take notice? My boy NAS mulled over the state of hip-hop in 2006 with the release of “Hip-Hop is Dead”.

Everybody sound the same,
commercialize the game
Reminiscin' when it wasn't all business
If it got where it started
So we all gather here for the dearly departed

The album generated a debate over the state of hip-hop music, and NAS became the unofficial leader of the “Hip-Hop is Dead” movement. Some blamed the death on Southern crunk and snap music. Many of the Southern rappers came to the defense of hip-hop. Big Boi from Outkast, T.I., Young Jeezy and Dem Franchize took offense that the South was under attack for ruining hip-hop.

The hip-hop commentary of NAS was endorsed by KRS-One, DMX and Ghostface Killah. The most significant deliberation on the topic came from Bryon Hurt in his 2006 documentary film Hip-Hop: Beyond Beats and Rhymes. Hurt explored the issues of masculinity, violence, homophobia and sexism in hip-hop music and culture. It’s a must see for anyone who loves the genre yet despises the images and messages associated with hip-hop.

The African Studies Program on the campus of North Carolina State University has been tackling the complexity of hip-hop music, its culture and its relationship to the academy with the African Diaspora Film Festival. It began on April 2 and concludes on Monday with the viewing of Bling and a panel discussion in which I will participate.

The series opened with the film Juice, starring Tupac. Gerard Brown, the screenwriter of Juice, was present to offer his insight and answer questions. That was followed up with the viewing of Hurts Hip Hop: Beyond Beats and Rhymes. On Monday, April 16, the film Sarabah was screened. The film from Senegal featured rapper, singer and activist Sista Fa who uses her music to end the practice of female genital cutting. Say My Name was also screened. The film features female artist who discuss class, race and gender and the difficulties associated with pursuing a career in a male dominated industry.

Monday’s viewing of Bling is the final film of the festival. Bling begins with travel to war-torn Sierra Leone in West Africa, and the correlation between the blood diamond industry and the call for justice in hip-hop music. The filmmakers explore the cultural significance of diamond jewelry in hip-hop and trace its evolution from the early 1980s old-school culture to the bling-encrusted industry of today.

Following Bling, the festival will culminate with a panel discussion on hip-hop culture, its place in the academy, and both its positive and negative impact. The panel will be moderated by Emmy Award winning filmmaker Dante James. James is Assistant Director of the African American Cultural Center at NC State. I will serve on the panel with Thomas Easley, hip-hop artist and director of the Community of Diversity in the College of Natural Resources at NC State and Sandra DuBose, a multi-talented performance artist.

Monday’s viewing of Bling begins at 7:00 PM at the Campus Cinema in the A.M. Witherspoon Student Center at 2810 Cates Avenue on the NC State University Campus. The event is free and open to the public.

Has hip-hop died or morphed into something different? Have those changes altered the images of black life, or exposed what was already present? Is hip-hop to blame for the thug life reflected in the music of Tupac, or is there something deeper within the mores of inner city life fueling the messages of hip-hop. On Monday we will explore these issues and more. I hope you can join me on the last day of the film festival.

The Africana Studies Program, housed in the Office of Interdisciplinary Studies in the College of Humani¬ties and Social Sciences at NC State University, offers students the opportunity to study the Black experi¬ence in Africa, the Americas, and throughout the African Diaspora. Students explore topics, issues and research from cross-cultural, international, transnational and multidisciplinary perspectives.
Posted by REV-elution at 1:21 PM