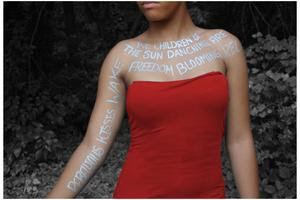 When the Daily Beast named Durham, NC the nation’s most tolerant city, my son, King Kenney, responded by writing about memories of being stopped by police for walking in his own neighborhood, driving for being black and enduring living in a community that fails to support African American men.

My son’s rant, posted on his Facebook wall, reflects a deeper concern related to the assumptions we make about tolerance. The absence of hate crimes, the presence of diversity and the acceptance of same-gender unions doesn’t negate the hostility felt by African American men.

His words speak to a deep angst that will appear on stage at the Hayti Heritage Center on Friday, February 24. Collective Sun – reshape the mo(u)rning is part performance, part exhibit and part audio installation. It tells the stories of how violence, prison and policing have eroded hope among African American boys and their mothers.

“We started this project eight years ago,” says Nia Wilson, executive director of SpiritHouse. “It’s a dialogue about the truth about policing in our community.”

SpiritHouse, the organization presenting Collective Sun, started listening and found common themes. They heard the pain of being followed by the police, being pulled over for no reason and having to endure it just because it comes with being black. They heard stories about life behind bars and the dread felt while waiting for your son to come home.

“How long have we survived this type of abuse,” Wilson asked. “Image the pain of a mother who has to deal with the fear of having her son walking in the streets.”

Rachael Derello will present a scene that confronts the agony of women delivering babies in prison. “They deliver babies while in shackles,” Derello says. “They give the mother 20 minutes with the baby and then they take the baby away.”

“These are stories that we don’t understand as stories,” Derello continued. “These are the stories of black mothers who fear our children will be taken away.”

Derello and Wilson say the work is an organic script. It is still brewing due to their desire to not silence a voice.

“In December we had a stage reading,” Wilson says. “From that reading we heard the voice of black men wasn’t strong enough.” It was an all female cast. It presented the perspective of mothers. The women on the stage begged for solutions on how to protect their boys and men. It shared the fear of their sons being killed or arrested. But those men weren't speaking.

The men had to be heard. They needed to hear the stories we don’t talk about. How does it feel to be policed constantly? How does it feel being followed whenever you go to the mall? What happens to the psyche of a black boy when he endures all of that attention just because of the color of his skin?

The celebration of Durham’s tolerance exposes a lack of compassion for the city’s black men. Truth is it’s not a Durham problem. Black men are feared and unjustly profiled around the world. We are assumed guilty until proven otherwise. We are maligned due to the notions of those who define us based on the clippings in the newspaper and evening news.

Yes, I’ve been stopped for driving while black and walking while black. Yes, I’ve been followed while shopping. I have watched white women cross the street when I approach them. To all that I respond: I don’t want the money in your purse. I’m not here to shoplift. You’re not my type so I have no interest in forcing you to have sex with me. I don’t fit the description of the man you are looking for. I’m 6’1” with locs. He’s 5’9” with a bald head. Let’s not forget they say he’s in his mid 20’s. Yes, I look good for my age, but I have children older than that!

Durham may be the most tolerant when it comes to certain things, but it sure gets old being forced into one of those pigeon holes used to define my character.

Someone may say that’s an overreaction. To that I respond, come to the Collective Sun: reshape the mo(u)rning. We can talk after the show.

For more information and to purchase tickets go to:
http://collectivesun.eventbrite.com/