Waiting for God to Show Up 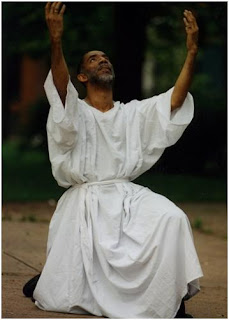 As wonder about Jesus hanging on the cross that day looking down as and asking God “Why have you forsaken me. After all I've done for you. Now I set here in darkness, homeless, hungry many times, sick, confess and feeling worthless, angry, you were silent. I cried out many of nights lying in bed in fear as I hear things being thrown, the sounds of holds being punched in the wall. I balled in like a baby with my ears covered for the sounds of glass being thrown. Yet you were silent. Yet I've never given up hope that one day you would show up.
4th Floor Red Zone Williams Ward

I received the above meditation the day after that moment. It was one of those rare occasions that forced a rethink regarding the assumptions I make. It was another reminder that I, like most of us, haven’t grown as much as I had thought.

While reclining on the couch at the Bean Trader on Ninth Street, that moment came as I wrote about the affairs in Durham, NC. It was in the middle of a line about our need to affirm people beyond our notions of worth. The truth hit me in the face.

I was sitting next to one of the homeless men known among those who frequent Ninth Street. It was a chilly night. He sat with his eyes glued to nowhere. As if he was thinking of something he couldn’t shake free. His body and face barely moved as he held a hot cup of Joe in his hand to thaw his body from the cold.

Then it happened. The door hastily opened as three African American men approached the man on the couch. I knew all three as members of the community of homeless. They approached their white companion as if on a mission. The air was filled with the odor of days devoid of soap and water. I fought back my disgust as I peaked at the words on my computer – “we must see the face of God beyond our assumptions.” Then love showed up.

“You alright man,” one of the men yelled shaking with deep concern. “You ok man.”

Each of them went into their pockets. They pulled dollars out and placed them in his hands. “We got you man. Don’t you worry bout that. We got you.”

The man on the couch nodded his head as he received the money. “Thank you,” he uttered.

“I’m impressed with you for doing that,” I said as the three missionaries prepared to leave.

“That’s what we do! That’s how we support each other,” the leader of the church said as they walked out the door.

The man next to me took a sip from his cup. He said nothing. I noticed the tear travelling down his cheek as if to say thank you.

I packed my bags and made my way to the car parked in front of the coffeehouse. I hurried my way in anticipation of the flood. It came before I closed the door. My tears came like guilt packed on top of my conceit. Guilt loaded on top of my assumptions. “That is what we do,” he said. Why can’t those who have so much do more?

The next day I received the journal entry from my friend Tony Johnson. He wrote it while in the hospital. He told me he wrote it while wondering if it is worth going on. It reflects his pain of being homeless, depressed, lonely and lacking resources to rise above the ashes. It reflects his pain of being rejected. He’s rejected for being gay. He’s rejected for being black. He carries the burden of walking in his own skin.

All he wants to do is dance.

But not just any dance. His body, frail from illness, is his voice. He moves like music in praise to the God he loves so much. Although rejected by many who see him as less than, his body says more. He keeps waiting and dancing and praying and hoping that God will show up.

Tony, God shows up whenever you show up. Your steps are guided by a higher truth. Dance Tony. Dance for the homeless on Ninth Street. Dance for those who do what they do – show love when others see no love in them. Dance for our friend on the couch. Dance for me.

While in a hospital bed he wondered if it is worth living. Yes, it is Tony. This is what we do. We love you back to your truth.

Rise and dance.
Posted by REV-elution at 9:52 AM