Play to Explore Black Women's Journey With Their Hair 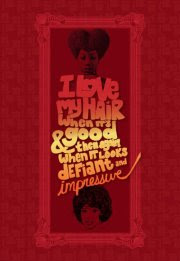 It’s a shame that black women have to worry so much about their hair. That stuff on top of their head goes a long way in establishing their identity. It’s the reason behind the enormous amount of money spent to press, relax, weave, twist, loc, curl, and dye and cut their glory.

It’s why a black woman will do serious damage to anyone who attempts to touch her hair. It’s one of those rules in black culture that those on the outside need to know. Keep your hands off despite your fascination with the unknown.

It’s virtually impossible to talk about a black woman’s understanding of self devoid of a conversation about how they view their hair. Many grow up with a conception of beauty linked to those Barbie dolls with long straight hair. Sadly, research still shows little girls pick those white dolls over the black ones. Beauty, in the eyes of too many, is connected to those white features.

Those themes and more are uncovered in a new play written by Chaunesti Webb. I Love My Hair When It’s Good: & Then Again When It Looks Defiant & Impressive will premiere in Durham, NC at Manbites Dog Theater, March 8-17. Webb will then take the play on the road to Boulder, Co on April 5. The play is certain to create the kind of buzz that will have folks talking about their journey with hair.

Webb grew up in Durham, NC where being Black and proud is made easy by the significant Black population. She moved from Durham to Boulder, CO where she completed the Master’s in Fine Arts in Theater and Contemporary Performance at Naropa University.

“I became part of the tiny 1% African American sliver of the demographic pie,” she says. “Coming out of the diversity of Durham, I was in shock. Everything "Black" about myself was magnified in this environment: my attitude, my point of view, my hair.”

It was while in Boulder that Webb began exploring her complicated relationship with her hair. She found 7 Black women from the Boulder-Denver area and for 10 weeks facilitated a creative process where they explored their feelings about their hair. Those discussions were transformed into her first full length play. The play integrated interview text, original music, movement and video.

Webb decided to dig deeper than with the first work. For the past few years she has listened to other Black women talk about their hair. The final product tells the joys and sorrows that Black women endure as they manage that nappy stuff. It travels through those early years when mama burns the neck with the pressing comb. It ponders the impressions of others when natural hair becomes a viable decision. More than that, it’s about relationships, coming of age, gender identity and so much more.

Webb received support for the development of the play through a Creation Fund Award from the National Performance Network, co-commissioned by the St. Joseph’s Historic Foundation in partnership with Naropa University, and the Durham Arts Council Emerging Artist program. “We still need to cover expenses related to rehearsal space, costumes, set construction, props, design and printing,” Webb says.

Given that so much of the identity of Black women is connected to their hair, this play paves the way for broader conversations involving how Black women view themselves and how those views are shaped by both their own and others perceptions of their hair. It is certain to stir memories. Hopefully it will help Black men understand Black women, and open the window for others to understand the agony Black women feel because of their hair.

As for me, I love a Black woman who loves her hair the way God made it!

You can contribute by going to this link: https://www.indiegogo.com/projects/65240/pledges/new
Posted by REV-elution at 2:53 PM