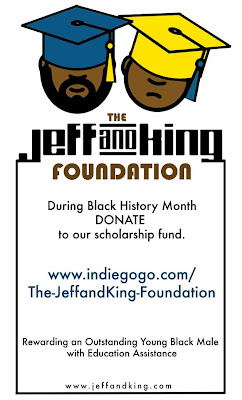 I have three amazing kids. Krista, I call her “Suga Baby”, exude intelligence. After graduating a year early from Jordan High School, she has moved on to complete degrees at North Carolina State University and graduate work at Columbia University in neuroscience. Lenise, I call her “Sweet Baby” teaches at Dudley High School. She has two Masters Degrees in her pocket and has enough passion to inspire a city.

Then there’s my son King. I call him “Your Royal Highness." After graduating with the highest grade point average in the sociology department at North Carolina Central University, the King relocated to Minneapolis Minnesota to take a shot at life in corporate America. Problem is he couldn’t get the doodles out of his system. His love for all things creative drew him back to his first love. His art landed him a scholarship to attend the School of the Arts Institute Chicago.

To say that I’m extremely proud and often overwhelmed with how my youngins turned out is an understatement. I’ve spent incalculable hours in an attempt to grasp how they blossomed into such wonderful fruit. Saying that acknowledges that behind it all is something more prevailing than my influence. Given all the variables related to the rearing of my children, it’s safe to conclude a higher power was in the room.

There is one consistent theme that permeates that room. They were nurtured in a community that understood and celebrated the clout of education. They watched me and their mother struggle to pave our own path. They watched two young parents fight to make a way for them devoid of the resources to make the journey easy. They watched us grow up with them as they were challenged to do the best they could. They watched us not as parents of privilege, but as two people grappling to do the best we could with what we had.

I wonder if my son’s new project is rooted in the agony of witnessing our struggle. I wonder if it is fueled by the pain of having to suffer as we pursued a dream in hope that we would be able to do more for our children.

Jeff and King are convinced that these disparities are rooted in a lack of consistent resources for African American males. They contend the cost of education has become a barrier for those who would attend college or remain enrolled if not for the cost.

It’s a factor often missed in conversations involving the psyche of African American men. If the goal is too costly, and there is no help to get to the other side of the river, one finds ways to contend with what remains. Could it be that poor academic performance among African American males is correlated to seeing college as an unattainable ambition? For those who do well, imagine the hostility linked to doing well in school, but not being able to go to college because there isn’t enough money left after mama and daddy balances the check book.

It’s a truth I understand all too well. King was born when I was 19. Lenise was born two years later, and Krista came when I was a 26 year-old graduating with a degree in journalism from the University of Missouri. The cost to achieve my goal was brutal on my kids. They watched as their mother ached because she had a passion to finish her degree. We grappled with not finding work that paid enough to provide for all they deserved because we were so young and lacked the education we needed.

They have to raise $15,000 in a month. We should double that amount. If you believe in youth and care about the dreams of those who are told no – find a way to support those dreams. Wipe those tears with your love.

I struggled to make my way. God knows I regret how it harmed my children to have a dad who pushed so hard to fulfill his own dreams. I hope they understand that I did it for them. I was young and lacked the support that so many take for granted.

Despite my limits, thank God for my kids. “Suga Baby,” “Sweet Baby,” and “Your Royal Highness.” God carried them when I couldn’t even carry myself.

Help me by helping my son help others fulfill their dream.
Posted by REV-elution at 11:32 AM