The University of Missouri vs. UNC: My Past Duels My Present Life 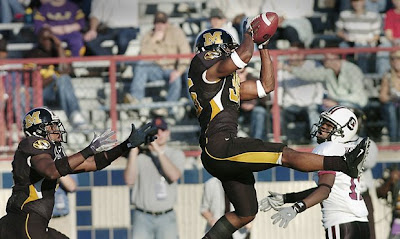 Photo from the Columbia Daily Tribune

It’s official. I’m homesick. It’s more than the usual angst that comes during the holiday season. Yes, I miss my mom and pops, my sister, niece and nephew and members of the Kenney, Warrick, Bush and Crum clan in Columbia, Missouri. Yes, I miss Doodle Bug, Mert, Ed, Darren, Gerrod and Rodney. I miss life on the block that made us more than an old school posse – we were best friends and family. I miss playing ball in the park within walking distance from the block. I miss all of that.

Today, I miss what football meant back home. From those days when we played gang games with the boys over in Miles Manor to winning state High School championships, and watching our friends go off to make it big in the NFL. I miss watching Leo Lewis prove everyone wrong when he rose to fame at Mizzou and then made it big with the Minnesota Vikings. I remember watching Gary Anderson as he made that move with the San Diego Chargers that caught attention across the nation. I still smile when I think about playing ball with Geri Ellis who went on to be inducted into the Green Bay Packers Hall of Fame.

There were so many local stars. Many left Hickman High to play ball at Mizzou, the school I attended. I remember when Hickman and Rockbridge, a school just opened, won state championships in their divisions the same year. We dominated. We took pride in the game. We played it as much as we could.

I’m not saying things were better in the goods ole days. I just miss those days. There’s no place like home. Home sweet home – football, barbeque that isn’t chopped and the university known for those columns behind Jesse Hall – is the stuff that made me into the man I am today.

The old me and the new me will clash in less than two hours. The old home, Missouri, will go to battle with the new home – The University of North Carolina-Chapel Hill- in the Independence Bowl. It helps that I’m protected by my affiliation with Duke University and the deep-seeded hatred between those Tar Heels and Blue Devils. I’ve found comfort in pretending that I care about the war on tobacco road. My heart is back home where football is king and the smell of the trees in autumn awakens thoughts of big dudes fighting to cross the goal line, rather than the sound of a swish with a three point shot.

Life down here in Dixie has been lonely at times. All that talk about color options – Carolina Blue versus the darker version – leaves me on the outside of the civil war. I crave the black & gold and the sound of the crowd coming from Fauort Field. I miss the chat of “M-I-Z-Z-O-U, T-I-G-E-R-S,” in anticipation of another six points.

I’m surrounded by all these blue folks as I crave black and gold. You see, Mizzou is more than a place that educated me in the field of journalism. It’s where this boy grew up. I love life in Durham, NC, but there is no place like home.

The University of Missouri versus The University of North Carolina. The past versus the present. The best of the past versus the best of, well some of the best of, what is in my life today. There is no winner in this game. It’s just another reminder that life is full of decisions, and you can’t have it both ways. In choosing between the past and the present you have to live with what it means to decide.

I wish I could live in the middle, but today I will root for the past. Tomorrow will be a new day, and I will go back to life in the present.

Until the game begins, I deal with life in the middle.
Posted by REV-elution at 3:26 PM