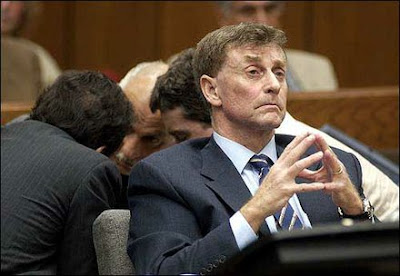 How should we feel about Michael Peterson getting a new trial? Sadness? Anger? Frustration? Regret? Or, is it shame that we should feel?

On Wednesday, Superior Court Judge Orlando Hudson ruled that Peterson deserves a new trial after he heard new evidence revealing shenanigans on the part of a former agent at the SBI lab. The recent hearing to consider a retrial focused on the expert testimony of Duane Deaver during Peterson’s 2003 trial. Peterson, a Durham novelist, former columnist for the Herald-Sun and candidate for Mayor, was sentenced to life in prison for killing his wife, Kathleen Peterson, in 2001.

Deaver’s handling of the evidence was so loathsome that Hudson asked David Rudolf, Peterson’s attorney, to research the possibility of appointing an investigator to consider other cases handled by Deaver. Peterson will be freed after posting a $300,000 secured bond while he waits for a new trial.

Tracey Cline, Durham’s District Attorney, says she’ll ask Roy Cooper, the State Attorney General, to prosecute the new trial. Hudson, who was the judge in the first trial, has indicated that he will ask the N.C Administrative Office of the Courts to appoint a new judge. Rudolf isn’t sure if he will lead the defense in the new trial. After a trial that lasted close to six months, drew national attention and a made for TV movie, one has to wonder what the heck was all of that about.

It all leaves me sad due to how a life was played with like a checker on a game board. Hudson’s ruling hit me like “whoops, sorry fellow. We’ll try it again.” I’m ashamed to have been a part of a community that rooted for the prosecution like fans for the home team. “Go get ‘em Jimmy!” Jim Hardin was the DA who prosecuted the case.

I’m ashamed that people held contempt for Peterson due to his columns and run for the Mayor seat. I wonder if the case against Peterson was prejudiced from the onset due to the public opinion based on his role in the community. Was the prosecution out to get him? Were members of that team incapable of seeing past their assumption of guilt? Did they look past the questionable evidence? Was the jury tainted by those columns in the Herald-Sun?

It all makes you question what makes a person guilty. Is it the evidence or is it the perceptions we hold regarding what smells a little funky. Think about those discussions at the coffee house or dinner table. “Hmm, I knew something was up wit him in tha first place,” simply insert the slang relevant to your kitchen table crowd.

I have to ask the question due to the obvious lesson learned from this trial. The prosecution of cases is a judgment call. We would like to think that the decision to move forward is grounded in a preponderance of evidence that proves guilt beyond all reasonable doubt. The thing that is tugging at my freaking spirit is the frequency of cases that go before a jury with evidence that belongs in the button of a dumpster.

I can’t help but wonder about the lack of a sleaze bag monitor to detect the mounds of bull crap before it ends up in court. Something stinks like cow manure whenever there’s a case certain to transform someone into an instant superstar. I’m not suggesting that the DA used the Peterson case to launch a career. Well, maybe I am. More than that submission, there’s something to be said about placing limits on how we view high profile cases.

None of that implies that Peterson is innocent. Given what happened on Wednesday, it will be more difficult for the next prosecutor to prove guilt. So much of the evidence will not be allowed in the next trial. What is more instructive related to this case is the impact of public perception in both moving the case forward and finding the dirty sucker guilty.

It hurts me to think that Peterson may be innocent. If that is true, he will find it difficult to reclaim what he had prior to being found guilty in 2003. He can’t get his home back. He has lost loads of money and a lucrative writing gig. He has lost a reputation as one of those community movers and shakers. More than any of that, he has lost his wife.

Duane Deaver lost his job for the way he mishandled this case. Sorry to say it, but that’s not enough. Maybe he should be put in prison to pay for the years Peterson lost. Sadly, there’s no way to make this right.

There’s one way to describe it all. It’s a damn shame. A low down dirty shame.
Posted by REV-elution at 2:18 PM