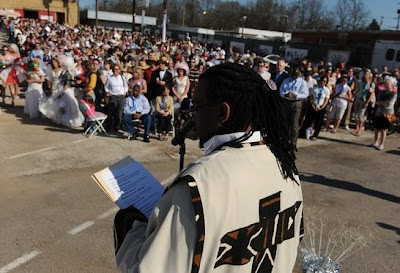 Over the next few days you will read and see broadcast reports of the top news stories of 2011. It’s an annual ritual that bestows a top ten list in a way common to one of those made for television award shows. It proves our fascination with the best of the best.

I have wrestled over putting my own list up. It just seems wrong to play God with the news by minimizing it to a best of list. How does one come up with the list in the first place? Is it the most read or talked about? Or, is it the most horrific? Should we look for examples of people who screwed things up so badly that it left us saying “Come on man!”

After pulling the leaves from a daisy, “yes I should, no I shouldn’t…” I have decided to reveal my top story of 2011. I’m doing so because, more than likely, it won’t appear on any of the other list. No one was killed in my story. No one lost their job for exposing their rear end. No one embezzled money from taxpayers or had a baby by some cheap stank while his wife was home fighting for her life. Nope. Not going there today.

My top story took place on March 9th in a parking lot on Rigsbee Avenue. Thousands of folks showed up. Some wore wedding dressing. A dude came on stilts. It was a wedding service. Citizens of Durham married the city we all love so much.

It’s my story of the year because of what it represented. It, more than any other event last year, brought us together to celebrate living in this amazing place. It came after years of hostility among members of the Board of Education and racial clashes between members of both the city council and Board of County Commissioners. It followed the embarrassment of being skull drug by the national press for that Duke Lacrosse situation.

It followed being called the state black sheep by journalist from across the state. We stood together, all types of people, and did a serious whopping on that old reputation as a city that simply refuses to get along. It’s the top story of the year because citizens came together to say Hell to tha naw to all that Durham bashing.

That day shifted the culture involving the way we think about ourselves as a community. It was our way of throwing a rock at the bullies from the other side of the track. We ain’t taking it no more! That’s right. Take you bad talk and inferiority complex and go back to that dungeon you call a home. We love it over here.

The Marry Durham celebration allowed us a chance to say what we all had been thinking. They say we can’t get along due to racial tension. We say we love our diversity. We love our local shops and take care of this world we love so much. We vow to do better at celebrating the arts. We hold our leaderships accountable. We’re not a community that throws stone at people for being different. We throw them at people who throw the stones. Back off my little brother and sister you jerk.

That day was like no other. It helps that I performed the ceremony and was able to stick a ring in Frank Stasio’s nose. Yeah, it gave me goose bumps gazing out in the crowd to view all those smiling faces. It also helps that I was able to work with a group of amazing people to pull it off. We worked through our differences. Shucks, there were times when I wanted to tell them to kiss my backside.

That’s what family does you know. We yell at each other. We walk away sometimes to deal with the anger. Then we come back to say, “you know I love ya baby.”