All I Want for Christmas is My Hope Back 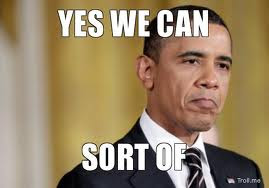 All I want for Christmas is hope restored. You know the type of hope that had us all yelling “Yes We Can!”

As we approach my favorite time of year, the celebration of Hanukkah and Christmas followed by the singing of Auld Lang Syne, it may be fitting to ask what happened to all that hope. Did it get kicked off a cliff after the Republicans got a hold of it and choked it back into reality? Was it stomped on by corporate kingpins who refused to let go of their bonuses and incentive packages. Or, was it all just a dream that came after we drank the Kool Aid with the toast to celebrate a black dude in the White House?

Something happened to that hope, and, once we woke up to yell, “No you didn’t”, the gush that came with hope seemed like a fantasy coming from a page of “Chronicles of Naira”. C.S. Lewis couldn’t have written a better script for how the international community felt when a soul brother and his chocolate fine wife moved in at 1600 Pennsylvania Avenue NW. There’s a bad feeling in the air now. It feels like hope has taken a vacation.

The demise of hope in the United States was enough to compel people to Occupy Wall Street and other communities around the country. It happened in Oakland, Baltimore and Atlanta, and in smaller pockets of pain like Chapel Hill and Durham, North Carolina. Some called it young folks smelling themselves. They minimized the Occupy movements to a generations angst related to not being able to get their way. They were called a bunch of spoiled brats unable to fit into the boxes society requires to make a real contribution.

A deeper reflection exposes a feeling of dread that has permeated the international community. Everywhere we looked, people protested. It started in London with a group of young people fed up with the way they have been treated. Things exploded in Egypt, Syria, Libya and Morocco. It would be effortless to play it down as divergence caused within a culture unlike our own. But, hold on before you throw those stones over there.

2011 was, to put it frankly, the year of deep frustration among common folks dealing with people in power. Be it a dictator like Muammar Gaddafi, Hosni Mubarak or King Mohammed of Morocco, or U.S. lawmakers and business leaders, folks refused to take it anymore. They are fed up from the head up and did what it took to bring attention to their being pissed off.

On a personal note, I stopped singing that song in July. You know the one that was played on the radio after Obama won the election – “A Change Gonna Come,” by Sam Cooke. The last few lines kept me inspired in my wait for hope.

There been times that I thought I couldn't last for long
But now I think I'm able to carry on
It's been a long, a long time coming
But I know a change gonna come, oh yes it will

Then it happened! It felt like hope got shot coming out of a liquor house on Dowd Street. It felt like a gang of white dudes wearing whites sheets took hope and strung him up in a hangman’s noose dangling from an oak tree. Felt like hope got fired because it’s still true-the last one hired is the first one fired. I started crying, No We Can’t!

Now I listen as people chastise all of that hope. They say hope was a punk who didn’t have guts enough to tell the Republicans to kiss his ass and take a seat while he finished his business. I listen now as they beat hope down with all that talk about his lack of insight regarding life among those privileged hope haters who make a living on people’s pain. They treat hope like an afterthought while snubbing any attempt forcing them to step down from that seat of privilege long enough to give other folks a chance to see how it feels to look at opportunity.

I listen as they tell the hopeless to get in the back of the line and mind your own business. Those with the hope that comes with having more than enough, lash out at the hopeless with “pull yourself up from your bootstraps”. How do you do that when you don’t have any bootstraps?

It leaves one feeling like a lab rat running through a maze as a dude in a white coat takes notes about how foolish you look while trying to escape. Maybe, just maybe, people are fed up with that ‘I got mine you get your own’ approach to the handling of our lives. After decades of buying into the notion that my condition is the result of a lack of effort or a failure to take advantage of what is offered in the good ole U.S.A, that bubble has exploded in my face. The hope in that dream is fading away.

It hurts accepting someone with more money and power is pulling the strings. It goes against everything I have been taught to believe to articulate the passing of hope. What else should I think after witnessing the nation held hostage due to the overly rich refusing to lend a hand by paying more taxes? What should I say after hearing a crowd roar in approval when candidates say let a patient die if they lack medical insurance?

There was hope and a bunch of Yes We Can prior to the unraveling of the truth. There was hope in the sanctioning of the voices of poor and middle class people. There was hope a movement away from systems that minimize and divide. Heck, there was hope that this nation would finally live up to the mushy messages that we so proudly sing about and die to maintain.

The international community was depending on us to lead the way. If America can’t do it, who can? Yes they can, and yes we will. Fueled by the hope we promised, many went and fought for their own piece of the dream. All while our own government remained stuck in stupid and refused to give in to the promises of hope – healthcare for all who need it, a livable wage for all and a quality education for all our children. There was hope in protecting our fragile world. There was hope in the singing of a new song.

Maybe we can resurrect that hope. It will take more than an election. We need hope in the strength we share.

All I want for Christmas is my hope back. It was a long, long time coming, and now, a change done gone. Oh, yes it did.
Posted by REV-elution at 11:26 AM