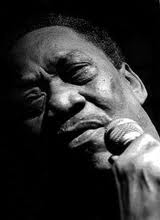 She’s Putting Something in My Food, is my favorite Bobby Blue Bland song. I used to rush to my car before 5:00 p.m. to hear Cy Young play it every Friday on WQOK.  I love the sound of Bland gurgling like poison has been placed in his food.

News of Bland coming to this year’s Bull Durham Blues Festival was enough to make me shout.  Bland and BB King are, in my opinion, the co-Kings of blues.  If you want to feel like your heart has been pulled out and stomped on by a woman who did you wrong, Bland is the man. Hand me some tissue.

This year’s festival is certain to rekindle memories of the old days before the event lost its home at the Durham Athletic Park.  It was the place to be in September.  Over the years, I have written about how the festival is a showcase of what makes Durham like no other place.  It’s a gathering of a diverse blend of folks.  You’re certain to run into the who’s who of Durham, and the simple Jane and Joe who came out to listen to some good music and dance.

The festival lost its appeal over the past few years due to being unable to find a venue that offered what the old ball park brings.  I loved the ball park because of how it reminded me of the movie that introduced me to Durham – Bull Durham.  There was something special about the old tobacco houses surrounding the park, and the bleachers that made you think about baseball, apple pie and the blues.

Although few sit in those bleachers, it was enough knowing they are there to remind you that we are in the Bull City.  Dang, it felt good walking on the grass, picking up some crawfish and something to soak it down while moving my hips to something that made me laugh and cry all at the same time.

I’ll never forget listening to Clarence Carter while thinking, “whew, I gotta preach in the morning.”  I couldn’t stop moving when Trombone Shorty went back and forth between his trombone and trumpet. I did the Wang Dang Doodle with Co Co Taylor all night long, and thought of afros, bell bottom pants and platform shoes when Isaac Hayes talked about Shaft being a bad mother, shut your mouth.

Yes, the best of the Bull Durham Blues Festival has been at that ball park where the movie was made.  That site was lost when the city decided to remodel the park and enter into a contract with minor league baseball.  Since then it has been moved to the Durham Bulls Stadium where the new team plays, the Durham Performing Arts Center where people were glued to seats, and last year near central park.

Now it’s back home.  Just in time for the 25th anniversary.  The entire city should pack the place to say welcome home.  It takes place on Friday, September 7th and Saturday, September 8th.

Having the growling Blue Bland is enough for me, but this year’s lineup is way over the top.  On Friday, Marcia Ball will perform.  Ball received her 5th GRAMMY nomination in 2012 as blues artist of the year.  Also on Friday is Luck Peterson, who had an R&B hit at the age of six for his song 1-2-3-4.

On stage with Bland on Saturday is Otis Clay.  There’s Kansas City Blues, Memphis Blues, Mississippi Delta Blues and then there’s Otis Clay, the King of Chicago soul and blues.  What more can Durham ask for as a way to celebrate the return of the festival to the place where it all got started.

Hold my crawfish.  I’ll see you at the park on September 7-8.

Don’t be confused if you see me dance.

In person: Hayti Heritage Center, 804 Old Fayetteville Street, from 10am – 5pm on Tuesday – Friday and 10am – 3pm on Saturday

For more information go to:
http://www.hayti.org/
Posted by REV-elution at 1:57 PM