Finding God with the Sikh community 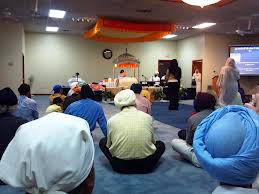 I felt the presence of God.  It didn’t come after the rendering of one of those soul stirring hymns.  It wasn’t after a prayer loaded with loud shouts and declarations accented with the name of Jesus.  It wasn’t a message in a sermon.  It came in the middle of a chant.
I didn’t understand one word.
I felt something budge from the inside.  It came after sitting for over an hour in a room filled with people from different faiths.  Death brought us together.  Shame forced us to pray.  Politicians and faith leaders uttered what all of us thought - what happened at the Oak Creek Sikh Temple in Wisconsin is not who we are as a nation.  The madness involving the murder of people while in prayer forced each of us to consider what it means to be an American.
No one knows what Wade Michael Page was thinking after opening fire on those in prayer.  The hundreds who gathered on Wednesday night at the Sikh Gurudwara of North Carolina declared a commitment to learn more about religions other than their own.  Bill Bell, mayor of Durham, and Michael Woodard, member of the Durham City Council, both talked about the importance of religious freedom.  All of the speakers did the same.
America is about freedom, not intolerance.
It is sad that it took death to bring us to this temple, Jose Lopez, Durham’s police chief and others said.  It is true.  It was my first time worshiping with the Sikh community.  There was so much I didn’t know about them.
“You know the first person beaten after 911 was a Sikh,” Michael Woodard whispered in my ear as we prepared to start worship.  The brochure passed out to visitors when we walked in states that 99% of those who wear turbans in the United States are Sikhs.  People confuse them with Muslims.  It’s one of many examples of how intolerance is fed by ignorance.
I sat and listened as small children walked into the temple and bowed before taking their seat on the floor.  I felt the sincerity as I watched as Sikhs watched me.  Their deep fixed stare was occupied with a smile.  Each person who smiled followed with “Thank you for coming.  Thank you so much for coming.”
I had to come.  How could I stay away?
“Forgive us Lord for the way some teach the faith I share,” I whispered as I listened to the soothing music and chant.  “Lord, help us become more loving.  Grant Christians the spirit of the Sikhs.”
That’s when I felt the movement from a place too deep to find. Psalms 42:7 came to mind. Deep calls to deep in the roar of your waterfalls; all your waves and breakers have swept over me. The floodgates were opened.  A wave of emotions forced me to swim to find safety.  I couldn’t find my way to the shore.  It was too much to get away from the flood.
Only questions emerged.  Why do we hate so much?  Why can’t we see the beauty in all religions?  Why the need to minimize others to validate our own faith?  Why can’t we stop and listen?
I paused from my fight with myself long enough to look at my friend.  Michael Woodward invited me to come.  He sat next to me in a way that seemed to reflect a need to find his own way.  His message to those gathered mentioned a Desmond Tutu talk about God not being just a Christian.  I considered my friends work on the city council.  I considered his work in the church he loves so much.  I thought of his run for the North Carolina Senate that is all but certain.  I thought of what brought him to the temple.
His gut ached as much as mine.  Deep calls to deep in the roar of the waterfalls, I had to stop swimming.  I couldn’t get there alone.  We have to get their together - one act of faith at a time. When we can’t swim any longer, our combined faith will carry us to the shore.
We then went outside to burn candles and pray. As those of Sikh faith prayed, I heard a song from that deep place. There’s a sweet, sweet spirit in this place.  I closed my eyes.  I opened them and looked at the flickering candles.  I was surrounded by light.  It came in the midst of darkness.  All of us were there – Christian, Muslim, Bahá'í, Jewish, Unitarian Universalist, Buddhist and Sikh.  We prayed together.
I’m not sure who began the rumor about needing to prove others wrong to make yourself right.  The sparks of light piercing through the darkness radiated beyond the sacred space in front of the temple.  We were held together by a hand large enough to calm the tension caused by indifference.
We became one.
It’s a shame people had to die to help us see the light.  Now that we have been captured by the power from the deep, we can’t let it go.
Too much has been lost to go back to what we were before it all happened.
I've got my light. I'm gonna let it shine.
Rest in peace.
Posted by REV-elution at 3:58 PM